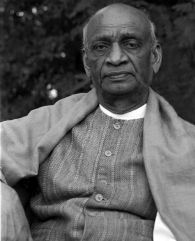 Sardar Vallabhbhai Patel's sage advice remains as relevant today as it was during his lifetime, says Vivek Gumaste.

P andit Jawaharlal Nehru was an international icon; a towering personality who strode the Indian political landscape as a colossus; the first prime minister of independent India who ruled the country for 17 long years; a man whose popularity is kept alive by a dynasty and a fawning sycophantic establishment.

In contrast, Sardar Vallabhbhai Patel died three years after India's independence and his memory is at best an afterthought for most Congressmen. Yet, in times of grave national crises, especially in situations that demand resolute leadership, the common refrain that resounds throughout the length and breadth of the country is: "Had Sardar been alive our country would not have seen such hard days.' (KL Panjabi . The Indomitable Sardar. Bharatiya Vidya Bhavan 1990)

As a resurgent Bharatiya Janata Party and an apprehensive Congress party trade sharp rhetorical barbs (the latest salvo being fired by BJP leader L K Advani, charging Nehru of dillydallying on the issue of military intervention in Kashmir in 1947), each accusing the other of mangling historical facts and  each staking an exclusive claim to his legacy; one invoking narrow party affiliation to bolster its assertion and the other transcending parochial barriers to own him in the greater national interest — it is imperative that we turn back the pages of history to make a valid and objective assessment of the man in contention; a man who has at different times been referred to as the 'Bismarck' of India and the 'Iron Man': Sardar Vallabhbhai Patel, India's first deputy prime minister.

This yearning is no conundrum. It is not an enigma that is hard to unravel. In an era of increasing political uncertainty precipitated by effete, non-existent leadership, one cannot but invoke the formidable, unwavering captaincy replete with logic, foresight and realism that Sardar Patel provided at a time infinitely more challenging and more complex than the present scenario.

In the current high-decibel, cantankerous debate about Sardar Patel, certain facts need to be clarified and re-emphasised, misperceptions need to be allayed and assumptions need to be reinforced by palpable evidence to comprehend the true message of the Sardar's life.

First, Sardar Vallabhbhai Patel was decidedly the frontrunner for prime ministership in 1947. Had internal democracy prevailed in the Indian National Congress, the Sardar would have been rightfully elected to the post and not Jawaharlal Nehru.

Pandit Nehru owed his appointment as Prime Minister to his election as President of the Congress in May 1946. Actually, Sardar Patel had been nominated by 12 Provincial Congress Committees out of 15. Only three of them had supported Nehru. In the ordinary course of events, Sardar was the obvious choice. But Gandhiji took a hand and persuaded Sardar and Kriplani to withdraw their candidatures.

For better or worse, Gandhi may have had his own reasons for choosing Jawaharlal Nehru over Patel, but it cannot mitigate the fact that it was a clear transgression of the democratic principle.

A lesser man than Patel would have sulked at being denied the top-most position by what was arguably an arbitrary decision. But not Sardar Patel: the mission that he had to accomplish was more important than personal aggrandisement:

He knew the election in 1946 was crucial but made way for Nehru at the bidding of Gandhiji… He wanted to build a strong and united India and as long as he had the liberty to do so, it did not matter which office he held.

Using an array of methods — gentle persuasion, forceful coercion and even military intervention — he moulded the 500-odd princely states that existed under British rule into a homogeneous viable administrative entity; a robust nation that has admirably withstood the tugs and pulls of extraneous and internal divisive forces and remains in place nearly 67 years later.

Without Patel's accomplishment, India would have degenerated into another ‘moth-eaten’ Pakistan dotted with islands of contradictions within its midst; irritants with the potential to morph into enemy states or terrorist havens in modern times: a definite recipe for failure. India would not have survived in its present form. His astute unification is a priceless treasure that he bequeathed to the people of India.

Was Patel communal in his outlook? Referencing the book, The Story of an Era Told without Ill Will by M K Nair, LK Advani, in his blog, describes how Nehru taunted Patel with the epithet of being "a total communalist" at a cabinet meeting. Was there any merit in this charge?

The answer is in the negative.

Political correctness was not Patel's forte, honesty was. His intuitive discernment pierced through the guiles of those who would do India harm and laid bare their true intent. He was not afraid to call a spade a spade and it was this bluntness that created the misperception of him being a communalist. Patel was particularly dismayed when no Muslim leader came forward to condemn Pakistan's aggression in Kashmir:

"I am a true friend of Muslims… I believe in plain speaking. I do not know how to mince matters…I ask them why they do not unequivocally denounce Pakistan for attacking Indian territory with the help of frontier tribesmen."

Outlining the difference between Nehru's assessment of the minority problem and Patel's, Ramachandra Guha (India After Gandhi. Picador.2007 ) writes:

"Nehru felt that it was the responsibility of the Congress and the government to make the Muslims in India feel secure. Patel on the other hand was inclined to place the responsibility on the minorities themselves. He once told Nehru that the 'Muslim citizens in India have a responsibility to remove the doubts and misgivings entertained by a large section of the people about their loyalty founded largely on their past association with the demand for Pakistan and the unfortunate activities of some of them’."

Note the emphasis on 'some of them' to appreciate the Sardar's realistic assessment of the situation compared to Nehru's simplistic and generalised approach which had a 'feel good' element sans any practical value.

It is this dichotomy of thought that persists today in the battle between the 'pseudo-secularism' practiced by the Congress and the genuine secularism advocated by the BJP.

Could the Sardar have altered the course of modern Indian history, had he lived longer and had his thought process prevailed? The answer is an unequivocal yes.

For one, the Kashmir problem would be non-existent today. And in all probability, India's humiliating defeat at the hands of China in 1962 would have been averted.

There were two key decision points with regard to Kashmir in the period immediately after independence which have had a long term impact on this imbroglio.

In the first, Patel's decisive approach (compared to Nehru's pussyfooting) was instrumental in forcing a timely military intervention in Kashmir, thus preventing the state from being lost to India forever as indicated by Field Marshall Sam Manekshaw (then a colonel) who was privy to the happenings at that time:

As usual Nehru talked about the United Nations, Russia, Africa, God almighty, everybody, until Sardar Patel lost his temper. He said, ‘Jawaharlal, do you want Kashmir, or do you want to give it away’. He ( Nehru ) said,’ Of course, I want Kashmir’ . Then he ( Patel ) said ‘Please give your orders’. And before he could say anything Sardar Patel turned to me and said, ‘You have got your orders’

At the second crossroad, Patel failed to prevail and we are paying the price for it, today.

On 20 December 1947, the Indian Cabinet finally decided to appeal to the United Nations to force Pakistan to withdraw the raiders. Patel was against doing so and wisely too…By referring to the United Nations, Nehru allowed what was legally a domestic Indian problem to become an international issue. If there was any argument over the ratification of the accession by Hari Singh then the only parties to the argument could be Nehru and Abdullah; how did Pakistan have any locus standi? The reference to the UN gave Pakistan a place in the argument. It was perhaps the most serious error of judgment which Nehru made, and he had no one to blame but himself.

In contrast to Nehru's gullible 'Hindi-Chini Bhai Bhai' mantra, Patel was wary of Chinese intentions and rightly so. He warned Nehru:

"Recent and bitter history also tells us that communism is no shield against imperialism and that the communists are as good or as bad as the imperialists or any other. Chinese ambitions in this respect not only cover the Himalayan slopes on our side but also include important parts of Assam…"

He also indicated to Nehru, the need to shore up our defence forces:

Patel urged Nehru to be 'alive to the new danger' from China, and to make India 'defensively strong’. He then outlined a series of steps to enhance security. He thought that in view of the 'rebuff' over Tibet, India should no longer advocate China's case for entry into the UN. Finally he argued that the latest developments should prompt a fresh reconsideration of our relationship with China, Russia, America, Britain …Patel seemed here to be hinting that India should reconsider its policy of non-alignment in favor of an alliance with the West.

We cannot rewrite history but we can learn from it. Patel's sage advice remains as relevant today as it was during his lifetime:

"Whether in political or in economic matters let us face the issues as realists, as men of responsibility and practical outlook. If this is done, we shall solve our problem much quicker and much more effectively than if we engaged ourselves in perpetual wrangles about the rights and wrongs of one principle or another of different issues. Let us postpone mutual bickerings and fault finding until we can afford this pastime. Today these will not avail us. They will only prevent us from taking action, positive and constructive, which is the need of the hour"

Looking for the real Sardar Patel have 1964 words, post on www.rediff.com at November 12, 2013. This is cached page on Asean News. If you want remove this page, please contact us.