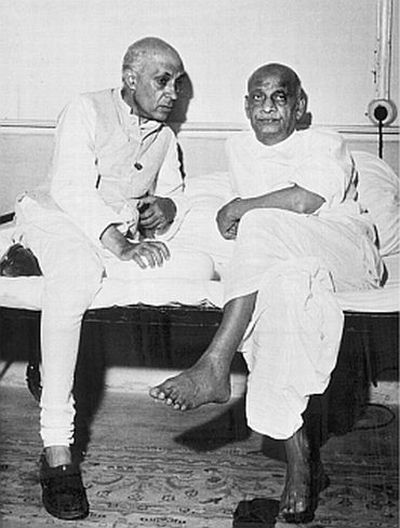 The debate on Sardar Patel's legacy is less about the Sardar and more about the acute sense of threat felt by the Delhi establishment at the rise of Narendra Modi and questions he has raised about the disproportionate share of credit given to a single family, says Colonel (retd) Anil Athale.

T he recent fracas over Sardar Patel's legacy and the unease amongst the defenders of the dynasty (themselves members of minor dynasties) triggered a childhood memory of a text book lesson on India's first prime minister.

The textbooks, to highlight the hardships suffered by Nehru in going to jail, informed us that the Nehru family was so rich that Motilal Nehru, Jawaharlal's father; used to send his laundry to Paris! Just to confirm, this author checked with contemporaries and even some younger generation persons and all of them remember this bit! One wonders if this genuine example of unadulterated sycophancy is still part of the NCERT text books! Readers of this column can help in this matter.

Historical 'ifs' are legitimate questions. If Dara Shekhu would have won his battle against Aurangzeb is a question many historians often ponder over. Recently as the opposition party's prime ministerial candidate made a remark that the country would have been very different had Sardar Patel become the first prime minister instead of Pandit Nehru, it provoked a huge backlash from the Delhi establishment.

The debate on Patel's legacy is less about the Sardar and more about the acute sense of threat felt by the Delhi establishment at the rise of Narendra Modi and questions he has raised about the disproportionate share of credit given to a single family. Actually it is the almost Stalinist stranglehold that the Left-leaning cabal that has fictionalised Indian history to such an extent that when even well known truth is spoken these individuals go into spasms of righteous rage!

In promotion of personalities other than Nehru, they see a threat to their entrenched positions in Delhi. But the good point is that this has raised the issue of neglect of other contributors to national cause! Even more than Sardar Patel, the founder of Indian National Army (the Azad Hind Fauj) Subhash Chandra Bose, has suffered greater neglect and is virtually sidelined in the history of Indian freedom struggle.

With the Left-leaning individuals having captured the Delhi-based institutions, the 'real' national heroes have been relegated to obscurity. This author has studied post WW-II freedom movements in many countries. In all these movements there were the over-ground and political elements and a prominent underground that pursued violence to fight the imperial powers, be it Jomo Kenyatta of Kenya or Nelson Mandela in his early years India was no exception to this rule.

But such has been the dominance of one family and one party over the national discourse for last 65 years that the contribution of the underground and violent moment for independence has been pushed out of public memory.

As a witness to a bygone era and a World War-II veteran, the late Lieutenant General Eric Vas was a participant in the tumultuous events of last stages of Indian struggle for independence. Writing an introduction to a jointly authored book If Bose had lived? Vas wrote,

"Once in each century or so, there appears in India a man who stands out above all others.  Subhas Chandra Bose, was such a person in the last century. Millions of Indians, while agreeing that Mahatma Gandhi represented all that is noble in the country's spirit and soul, would insist that it is Bose and not Gandhi who was India's man of destiny. Millions of Indians, irrespective of their religion, caste, language and regional affiliations, were captivated, entranced and fascinated by Bose. He received from his followers an unabashed hero-worship as a kind of unifying national symbol; an embodiment of the secular modern aspirations of the nation. Neither Gandhi, nor Jinnah nor Jawaharlal Nehru could match Bose's charisma."

Most Indians of that generation agree with this assessment of Bose. Yet in post Independence India he is an almost forgotten figure. Mystery surrounding his death still persists and even 60 years after the govt of India refuses to part with the documents concerning Bose!

But looking beyond the vested interest in perpetuating the myth of the ruling family and its prowess, is a very un-Indian academic approach. The Judeo-Christian-Islamic world view of the Westernised elites tends to see the 'God' figure of Nehru as flawless and complete with no weaknesses.

Whereas the Indian civilisational heroes are without exception, flawed. In human form even the God cannot be flawless and perfect. Thus both Ram and Krishna met tragic ends. One was never forgiven by Sita, whom he had wrongly abandoned and the other migrated from his birthplace to far off Dwarka as he failed to stop the infighting amongst the Yadavas. Incidentally, in many languages the word for civil war is 'Yadavi yudha'.

The Stalinist mindset displayed by the critics who turn abusive if the Nehru legacy is questioned is doing great harm to rational discourse on problems confronting the nation. Such is the intolerance of this Eglistani (Mahatma Gandhi's word to describe them in his Hind Swaraj essay) elite that any advocacy of even Yoga, Ayurveda, Indian philosophy or culture is dismissed as 'communal' and divisive.

This brings one face to face with oft repeated issue of 'idea of India'. The ruling cabal would picture India as the 'gift' of the first family. All that is good attributed to it while the failures are heaped on the weakness of others. What the Sardar Patel controversy has brought into open is the desperation of the slow on uptake great grandson of Pandit Nehru in claiming political office as matter of inheritance.

By questioning the inheritance itself the critics have hit at the weak spot of the dynasty. As a co-author of history of 1962 India-China conflict, this author has first hand experience of the obstacles put in path of writing and publishing history that shows mistakes of the Great Helmsman. The saddest part is that Nehru's achievements are many and sterling. Despite his failures and mistakes he remains a tall historical figure.

It is the dynasty and sycophants who are disfiguring his legacy, not his critics.

Lt Gen Eric Vas and Colonel Anil Athale co-authored the e-book ' Unmaking of Pakistan: If Bose had Lived ' is available as free download at www.inpad.org .

The legacy of Sardar Patel: History as a political football! have 1418 words, post on www.rediff.com at November 6, 2013. This is cached page on Asean News. If you want remove this page, please contact us.