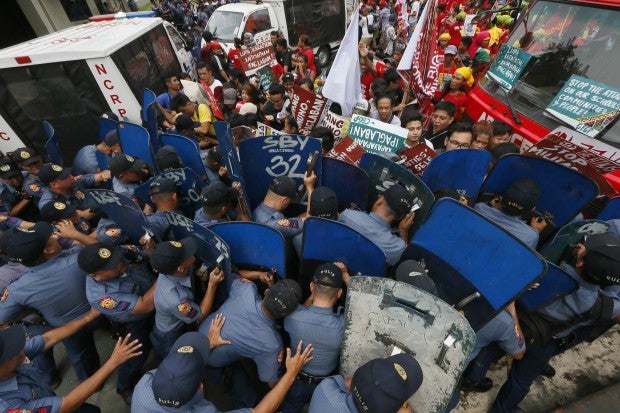 Manila policemen with shields block protesters from approaching the US Embassy on Oct. 19, 2016. Dozens were hurt when cops forcibly dispersed the protesters calling for an independent foreign affairs policy for the Philippines. (AP)

A police van barreled into a crowd of anti-US protesters on Wednesday, wounding several demonstrators who were calling for an end to American military presence in the Philippines.

An Associated Press (AP) video showed the van driven by a police officer sprinting back and forth about 20 meters into the crowd, which had surrounded the vehicle in front of the US embassy, hitting it with batons seized from antiriot police.

The van scattered the protesters, hurtling some like bowling pins. A few got ran over but somehow managed to stand.

One of them, Jessica Agustin, was pinned under the vehicle, a front tire missing her head by only a few centimeters.

Other protesters pelted the van with red "paint bombs" as they tried to stop it from running over them. Other police officers could be seen doing nothing to stop the van from hurting more people.

The police also used teargas to disperse about 1,000 protesters as they were about to end their rally, said Bagong Alyansang Makabayan secretary general Renato Reyes.

"There was absolutely no justification for it," Reyes said of the police action. "Even as the president vowed an independent foreign policy, Philippine police forces still act as running dogs of the US."

40 policemen were hurt in the clash with the protesters he also accused of damaging four police vehicles.

Jerome Succor, head of Sandugo, one of the rally organizers, said 10 of 50 treated for injuries remained at Philippine General Hospital.

Police rounded up 26 people, including two "lumad" girls age 14 and 15, but released them all without charges.

Pedrozo said the police enforced maximum tolerance, which allowed the protesters to get close enough to the embassy walls to spraypaint them with graffiti.

Chief Supt. Oscar Albayalde, head of the National Capital Regional Police Office, said the driver of the van was not at fault.

"The rallyers were trying to flip over the patrol car. In the process, the driver extricated the patrol car and inadvertently hit some unruly protesters who sustained minor injuries," Abayalde said in a statement.

The driver was identified as PO3 Franklin Koh.

She said she would make a report to President Duterte.

"Our sisters and brothers face development aggression and militarization in the provinces. Now they were subjected to police brutality," she said.

Mr. Duterte told reporters in China where he is on a state visit, he has directed an investigation into the incident but he will not be "going into the blame game at the start."

The Philippine National Police said in a statement it would investigate the confrontation, whether operational procedures were properly carried out and also to determine "the liabilities of all personalities from both sides whose involvement led to the violent incident."

The protesters also wanted to show support for the President's statements asserting a foreign policy independent of the United States, the country's longtime ally.

Mr. Duterte is in China partly to repair relations strained under his predecessor over territorial conflicts in the South China Sea.

He is also seeking to expand trade, investments and financing for badly needed infrastructure projects.

Amid an uneasy relationship with the United States, Mr. Duterte has tried to reach out to China and Russia, bringing uncertainty to his country's longtime alliance with America. — WITH REPORTS FROM JEROME ANING, DONA Z. PAZZIBUGAN, AFP, AP

Violent dispersal of US Embassy protesters ordered by MPD exec—groups

Police van rams protesters, disperses rally at US embassy have 741 words, post on newsinfo.inquirer.net at October 20, 2016. This is cached page on Asean News. If you want remove this page, please contact us.