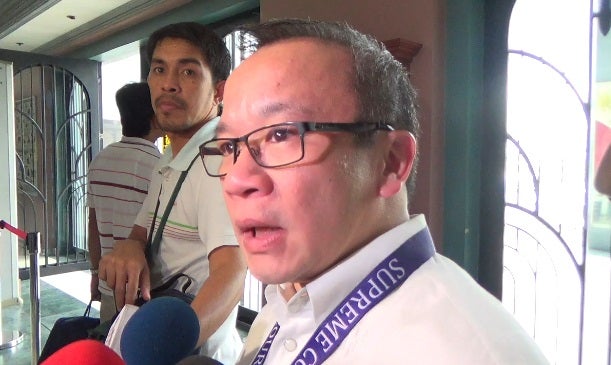 Nobody appealed to the Supreme Court to stop it, so the burial of ex-dictator Ferdinand Marcos at Libingan ng mga Bayani proceeded on Friday, although on the sly.

Despite mounting opposition, Marcos was buried with military honors at Libingan 10 days after the Supreme Court endorsed the decision of President Duterte to allow one of Asia's most infamous tyrants to be buried among heroes.

In a text message, Supreme Court spokesperson Theodore Te said there was no prohibition to the burial because the 9-5 decision of the court on Nov. 8 upholding Mr. Duterte's decision also lifted the status quo ante order issued by the tribunal in September.

Te said the Supreme Court was "in between sessions"  and only Chief Justice Maria Lourdes Sereno could have issued a temporary restraining order to stop the burial "if there is a request and a written recommendation" from the writer of the decision, Associate Justice Diosdado Peralta.

The majority ruled that Mr. Duterte did not commit grave abuse of discretion when he allowed the burial of Marcos at Libingan because the former dictator was qualified to lie among dead soldiers and Presidents like him.

Te said the petitioners opposing the burial had not filed a motion for reconsideration (MR), claiming they had not yet received a copy of the decision.

The National Union of Public Lawyers (NUPL), counsel for the petitioners, said they would file an urgent motion for contempt and show cause against former first lady Imelda Marcos and her family, the Armed Forces of the Philippines and the Philippine National Police for the "premature and hasty execution of the Supreme Court ruling, which had not yet become final and executory.

Days after the court handed down its decision, the NUPL  warned of a clandestine plan by Marcos to bury her husband at Libingan, as the military had started preparations for the burial.

"The military, police and top government officials [are] obviously in conspiracy with the Marcos family for [a] sneaky and shameless hero's burial. It was premeditated and orchestrated to jump the gun on protests and possible reversal or deferral of court decision. Very Marcosian," NUPL secretary general Edre Olalia said.

There was no appeal vs burial, says Supreme Court have 505 words, post on newsinfo.inquirer.net at November 19, 2016. This is cached page on Asean News. If you want remove this page, please contact us.