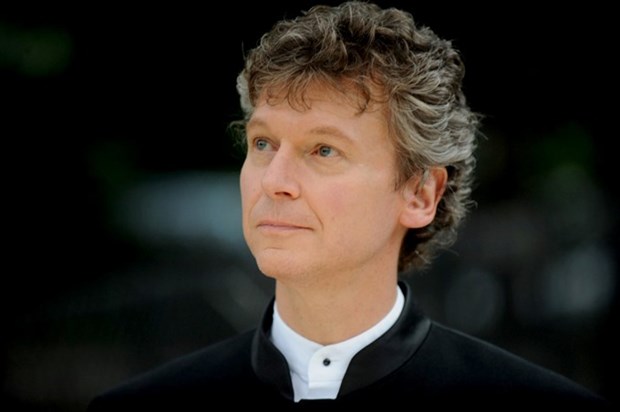 American conductor Christopher Zimmerman, music director of Fairfax Symphony Orchestra in the US, will lead a Scheherazade Concert at the HCM City Opera House on October 19. (Photo: courtesy of HBSO)

HCM City (VNS/VNA) – American conductor Christopher Zimmerman , music director of Fairfax Symphony Orchestra in the US, will lead a Scheherazade concert at the HCM City Opera House on October 19.

The concert will feature Scheherazade, op 35, a symphonic suite composed by Nikolai Rimsky-Korsakov in 1888.

The four-movement work was inspired by One Thousand and One Nights, a collection of Middle Eastern and Indian tales told by the sultan Scheherazade.

Scheherazade was first performed in Saint Petersburg in November 1988. It is considered Rimsky-Korsakov's most popular work.

In 1910, the Ballets Russes premiered a ballet adaptation of Scheherazade at the Opéra Garnier in Paris in 1910. The Russian choreographer Michel Fokine was the choreographer, and the libretto by Fokine and Léon Bakst of Russia.

Vietnamese-American violist Vu Viet Chuong will perform along with musicians from the HCM City Ballet Symphony Orchestra and Opera (HBSO).

He has also performed at international music festivals in the US, UK and Brazil.

He is co-founder of the Vietnam Connection Music Festival, which attracts leading classical artists in Vietnam and the world.

Internationally acclaimed Vietnamese-British pianist Tra Nguyen will give a solo performance of Concerto in F for Piano and Orchestra, a composition by American composer and pianist George Gershwin.

The work, written in 1925, contains elements of blues, ragtime, and Charleston music. All are new to the classical form.

It was first performed by the New York Symphony Orchestra in 1925, with Gershwin as a soloist.

Tra Nguyen, who studied at Moscow Tchaikovsky Conservatory in Russia and at the Royal Academy of Music in the UK, gave her first performance at the Hanoi Opera House when she was ten years old.

She has performed at other prestigious venues, including the Queen Elizabeth Hall, Cadogan Hall, Wigmore Hall, the Kennedy Center, and Tokyo Opera.

She has issued a number of CDs for piano and orchestra.
The concert will also include English composer Edward Elgar's Introduction and Allegro for Strings, op 47.

The work was written in 1905 and performed in an all-Elgar concert by the newly formed London Symphony Orchestra.

Conductor Zimmerman graduated from Yale University with a Bachelor of Arts in Music, and received his Master's degree from the University of Michigan.

Zimmerman was formerly the music director of the Symphony of Southeast Texas, the Bangor Symphony Orchestra and the City of London Chamber Orchestra.

Since 2009, he has been music director of the Fairfax Symphony Orchestra, which was the 2013 winner of the Best Classical Orchestra Ensemble given by the Washington DC Area Musical Awards.

The Scheherazade Concert will begin at 8 pm at 7 Lam Sơn Square in District 1. Tickets are available at the venue and www.ticketbox.vn.-VNS/VNA

US conductor leads "Scheherazade Concert" in HCM City have 758 words, post on en.vietnamplus.vn at October 14, 2018. This is cached page on Asean News. If you want remove this page, please contact us.