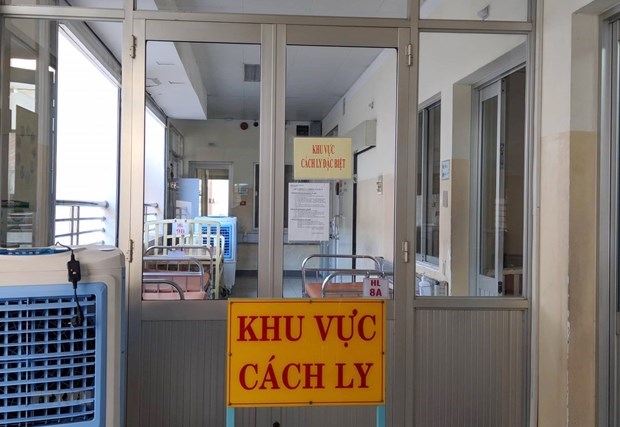 Illustrative image (Photo: VNA)
Hanoi (VNA) – Localities across the country are proactively implementing measures to prevent the spread of the acute respiratory disease caused by the novel coronavirus (COVID-19).

A training exercise on how to deal with patients who are suspected of infection was held on February 11 in the Central Highlands province of Dak Lak .

Bui Khac Hung, Director of Krong Pak district's Health Centre, said the premise of the drill was how to detect a patient showing infection symptoms and determine if they had come into contact with people returning from virus-stricken areas.

The exercise providing necessary knowledge for health workers in the province while enhancing the response capacity for the health sector in case of outbreak, he said.

The province has reported 15 people with suspected Covid-19 infection as of February 11. Twelve of them tested negative and have been discharged.

In Kien Giang province, Nguyen Van Thanh, Vice Rector of the Kien Giang University, said all buildings, student dormitory, library and departments have been disinfected ahead of students returning.

Nearly 4,100 students are studying in the university including 150 from Laos and Cambodia. 500 are living at the dormitory.

The university has organised training classes to provide knowledge related to COVID-19 to all students and also distributed 4,500 free face masks.

Despite being free of suspected cases, the province will continue monitoring and managing people entering the province.

Measures for combating and preventing COVID-19 have been adopted at other provinces and cities including Bac Giang, Dien Bien, Lam Dong and HCM City.

Three facilities have been set up for quarantine in the northern province of Bac Giang. The authorities have quarantined 27 people including 10 Chinese nationals by February 10.

As many as 48 people who came from or transit via virus-hit areas of China were put under 14-day quarantine in Lam Dong province.

Similar actions are underway in the northern province of Dien Bien which borders China and where a lot of trade activities take place.

The provincial agencies also tightened monitoring anybody entering the province and the country.

In HCM City, Li Ding, a Chinese national, has been discharged from Cho Ray Hospital on February 12, becoming the seventh patient to be successfully treated in Vietnam.

Li Ding and his son, Li Zichao, were the first people infected with the virus in the country.

His son was discharged on February 4. But Ding was treated for longer as he has different ailments including diabetes, lung cancer and hypertension.

According to the HCM City Centre for Disease Control, the city still has one suspected case and more than 2,580 people quarantined. Of these, 2,521 people are being monitored at home.

Deputy Prime Minister Vu Duc Dam has requested ministries, agencies and localities to tighten supervision to stamp out any outbreak and prevent transmission.

Speaking at a meeting held in Hanoi on February 12, Dam said although the number of cases in Vietnam remained small and there were positive signs in treatment, the disease was expected to develop and there was high risk of outbreak.

He asked forces to step up communication work to raise awareness of quarantined people about their responsibilities towards families and society. The Deputy PM also instructed ministries and agencies to provide support in human resources and medical equipment to Vinh Phuc province, which has the most infection cases so far.

Deputy Minister of Health Truong Quoc Cuong said in accordance with research data, the fatalities rate was 2-3 percent, the epidemic was more contagious than severe acute respiratory syndrome (SARS) and other coronavirus with infection rate of between 2.5 and 4.

He emphasised the need to prevent disease transmission by improving quarantine work and stamping out disease on the spot./.

Localities take COVID-19 prevention measures have 873 words, post on en.vietnamplus.vn at February 13, 2020. This is cached page on Asean News. If you want remove this page, please contact us.