MANILA, Philippines — A member of the League of Filipino Students (LFS) was arrested after a clash during a rally dispersal in front of the United States Embassy in Manila on Thursday morning. 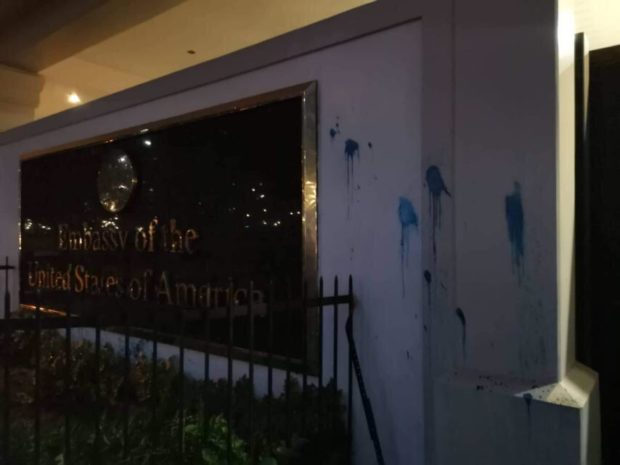 Members of the League of Filipino Students vandalized the facade of the US Embassy during a lightning rally in Manila Thursday morning. (Photo courtesy of MPD)

The Manila Police District (MPD) said the 17-year-old protester was among the around 50 LFS members who pretended to be joggers and passersby and suddenly staged a rally in front of the main gate of the embassy at about 4:50 a.m.

Officers of the MPD District Mobile Force Battalion who were at the area blocked the protesters, while additional police personnel immediately responded.

At about 5:10 a.m., the protesters vandalized the embassy's facade, police said.

The protesters were dispersed at around 5:15 a.m.

The activist, whom the police described in its report as a "suspect," will be brought at the MPD headquarters after undergoing medical examination at the Ospital ng Maynila.

INQUIRER.net is still seeking comment from LFS as of posting time.

Youth activist arrested at US Embassy rally have 290 words, post on newsinfo.inquirer.net at February 6, 2020. This is cached page on Asean News. If you want remove this page, please contact us.