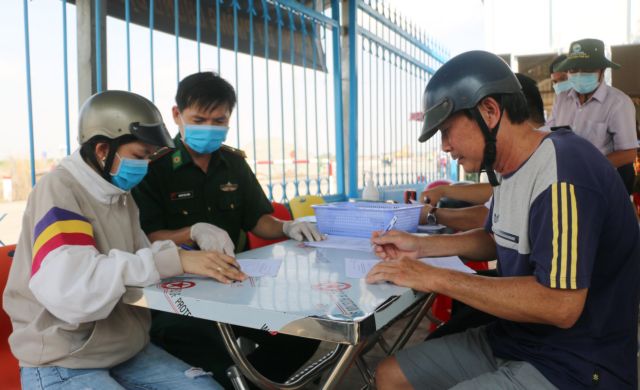 People travelling on buses, boats and motorbikes must fill out health declarations when going through the Khánh Bình border gate in An Giang Province’s An Phú District. — VNA/VNS Photo Công Mạo

HCM CITY — If the number of patients infected with COVID-19 increases in HCM City, the Cần Giờ District Health Centre in the city will be used as a hospital specialising in treatment.

The centre has 300 beds and will be equipped with modern machines for recovery and isolation areas will also be set up.

The department’s centre that regulates the use of medical personnel will send doctors at specialised and general hospitals turn-by-turn to the centre.

The HCM City Department of Health’s steering board for COVID-19 prevention and control has instructed hospitals and health centres to set up more isolation areas for people from areas in Việt Nam and in countries where the disease is breaking out.

The department is working with the Military High Command to open three isolation areas in the city’s outlying districts of Nhà Bè, Củ Chi and Cần Giờ besides the districts’ own areas.

Three other areas under management of the Ministry of National Defence will be put into use in districts 12 and Hóc Môn and the campus of Military Hospital 175.

The Ministry of Health has decided that three children’s hospitals and the Hospital for Tropical Diseases will have isolation departments for treatment of people who have tested positive for COVID-19 and those who are waiting to be tested.

As many as 47 private and public general hospitals have isolation departments for people with suspected symptoms. The city has one field hospital in Củ Chi District.

As of yesterday, one more person tested positive for COVID-19, increasing the total number to four cases. The patient is being treated at the Hospital for Tropical Diseases, and the other three recently recovered.

Staff at Tân Sơn Nhất International Airport are overloaded due to the compulsory electronic health declarations for all passengers entering Việt Nam that began at 6am on March 7.

Many passengers are not familiar with the electronic health declarations so they must queue to ask for guidance from airport staff.

Many flight arrivals have led to congestion at the airport because of the health declarations. Tân Sơn Nhất International Airport has nearly 10,000 passengers a day.

On Monday, all passengers entering Việt Nam from Cambodia through the Khánh Bình border gate in An Phú District in the Mekong Delta province of An Giang have to fill out health declarations as well as have body temperatures checked. There are 500-700 passengers who go through the border gate each day.

The chairman of the provincial People’s Committee, Nguyễn Thanh Bình, has instructed border customs to ask people travelling between the province’s An Phú District and Cambodia by boat to declare their health status and have their body temperature checked. An Phú District has two wharves.

Border guards in the southern region have been told to strengthen prevention and control of COVID-19 at border gates, and control people’s entry and exit on dirt paths. — VNS

Watch out new daily series bringing you the lighthearted side of the COVID-19 epidemic.

Centre to be used as specialised hospital if COVID-19 cases increase have 752 words, post on vietnamnews.vn at March 11, 2020. This is cached page on Asean News. If you want remove this page, please contact us.