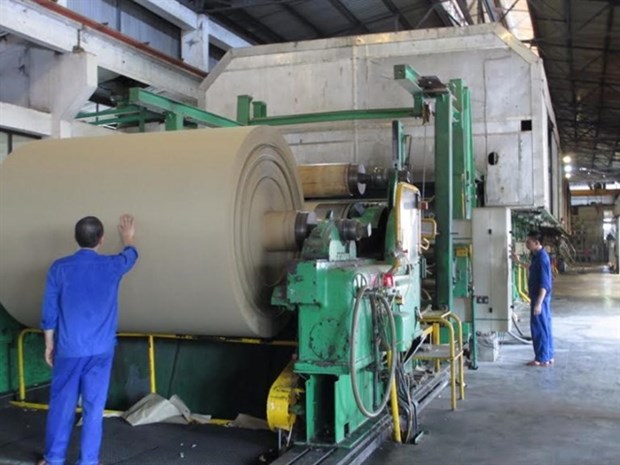 Hanoi (VNS/VNA) – An increasing demand for tissue paper amid the COVID-19 pandemic means the future is looking bright for businesses in the paper industry .

According to the Vietnam Pulp and Paper Association (VPPA), in the first five months of the year, paper production was estimated at 1.85 million tonnes, up 7.8 percent over the same period last year.

Paper exports reached 656,900 tonnes, up 97.4 percent. Paper imports reached 853,100 tonnes, up 7.8 percent over the same period in 2019. Packaging paper and tissue paper products all grew in terms of production, export and import.

In the tissue paper segment, domestic consumption and export demand surged by 40.2 percent year-on-year due to the outbreak, offering opportunities for paper businesses with large production capacity.

Paper producer Dong Hai Joint Stock Company of Bentre (DHC) reported positive earnings in Q2 and in the first half of this year.

The company's Giao Long Paper Factory phase II holds advantages in both scale and production capacity of kraft paper and carton packaging, giving DHC a competitive edge over its competitors.

Besides, with a large market share of the packaging segment for the seafood, garment and pharmaceutical industries, DHC is forecast to continue to achieve strong growth in the last two quarters of the year and beyond as demand rises.

Hapaco Group JSC (HAP) has recently announced investment plans to expand its tissue paper production lines. The new project is expected to improve the company's business efficiency in the future. The plan has boosted the price of HAP on the stock market, reaching its ceiling prices in the past 12 trading sessions.

At its 2020 AGM, GVT approved a plan to invest in new packaging paper production lines. Its leaders targeted to increase the company's productivity to 150,000 tonnes per year.

The production and export of books and notebooks will also increase again when pupils and students go back to school after the summer holidays.

This is good news for companies in this segment including the Bai Bang Paper Company, Vietnam Paper Corporation and other member companies./.

Paper companies see bright prospects as demand increases have 594 words, post on en.vietnamplus.vn at September 6, 2020. This is cached page on Asean News. If you want remove this page, please contact us.