MANILA, Philippines — President Rodrigo Duterte says he once ordered a "discreet" probe into the alleged extrajudicial killings (EJKs) being blamed on his administration because he was bothered by the issue.

The probe revealed that the killings were not state-sponsored but stemmed from conflicts between rival drug syndicates, Duterte said in his prerecorded address that was aired Monday night.

"Truthfully, I also had my doubts," he said, speaking partly in Filipino. "There was a time when I conducted a discreet hearing. The information that reached me was that sometimes there is a rivalry of the turf — their territory, as to who was controlling it," Duterte said before members of his Cabinet.

"Second, someone ran away with the money. And third, their [drugs] were stolen at the street level. That's what we don't know. They said it was the police [who did it]. But, you know, if I were a policeman, I would go all out. why would I get from those at the street level, or what they called garbage collectors [basurero]," he added.

Duterte's made these statements after criticizing the opposition and leftists for harping on accusations against his administration — including the issue of EJKs.

Duterte has repeatedly vowed to protect police officers, even offering them legal help, against possible cases that might be filed against them in the course of their implementing the campaign against illegal drugs.

However, some police officers did not escape prosecution, notably three members of the Caloocan City Police Station who were convicted of the murder of teenager Kian de los Santos during a drug operation — despite De los Santos not being the original target and despite his pleas to the officers that he was not involved in the illegal drug trade.

Eventually, Duterte acknowledged the possibility of some police officers being involved in a drug recycling scheme, in which confiscated substances, like crystal meth, were sold. 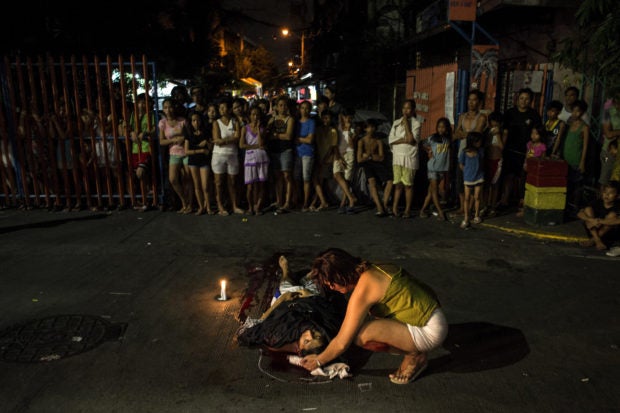 This file photo, taken on Oct. 3, 2017, shows Nanette Castillo looking at the body of her son Aldrin, an alleged drug user killed by unidentified assailants, in Manila. President Rodrigo Duterte on Dec. 5, 2017, told human rights groups criticizing his deadly anti-drug war to "go to hell" after ordering police back to the frontlines of the crackdown. (Photo by NOEL CELIS / AFP)

To counter the scheme, Duterte suggested that prosecutors in a drug case request a judge for an inspection of the confiscated substances as it was not always possible to keep track of them because of their sheer volume.

There should also be crime lab technicians who would test the seized drugs — both those present to a judge during trial and those in storage — to make sure that they had not been replaced.

Finally, Duterte said he would want all seized crystal meth, no matter how small the amount, to be destroyed by next week.

"You have so many days to do it, one week.  Do it in one week, destroy and get a specimen," he said.

‘Discreet’ probe shows warring drug gangs behind EJKs – President have 866 words, post on newsinfo.inquirer.net at October 6, 2020. This is cached page on Asean News. If you want remove this page, please contact us.