Hong Kong (CNN) Whenever there is a change of power in Washington, it is traditional for the outgoing president to write his successor a note, offering advice and a welcome of sorts to the small fraternity of United States leaders.

George W. Bush warned Barack Obama that “the critics will rage (and) your ‘friends’ will disappoint you,” while Obama urged current US President Donald Trump to “sustain the international order that’s expanded steadily since the end of the Cold War.”
Anyone looking to advise the occupant of the Oval Office in January — whether that is incumbent Trump beginning a second term, or a new President Joe Biden — would do well to urge them to focus on the US relationship with China, which has cratered during Trump’s time in office.
Indeed, the President who takes the oath of office in 2021 may be the first in two decades whose biggest foreign policy challenge is not the wreckage left by Washington’s twin invasions of Afghanistan and Iraq, but dealing with a new, multipolar world order where the US is no longer the sole superpower.
China currently challenges the US for position as the world’s largest economy, and, with a massively expanded and emboldened military, threatens US forces or their allies in a number of potential hotspots. Observers have warned of a new Cold War, or even the potential of open conflict or proxy battles between the two powers.
Read More
Under Trump, Washington hit China with trade tariffs, sanctioned Chinese and Hong Kong officials, and stepped up aid and support for the democratic and self-governing island of Taiwan. This year has seen Trump repeatedly blaming Beijing for the coronavirus pandemic , and the shuttering of consulates in both the US and China.
Beijing, for its part, will be looking for a reset in January no matter how the election turns out. China’s leaders have not appreciated being a talking point in that contest, which has exposed how hawkishness towards Beijing is increasingly the cross-party consensus in Washington.
Ryan Manuel, managing director of Official China and an expert on the Chinese leadership, said relations with the US are “the personal responsibility of (President) Xi Jinping and he’s already been criticized internally about the deterioration in affairs.”
“The Chinese system at the moment has been told to wait and hold, and only act exactly in proportion to what the US does,” Manuel added. “Once the election is over the push for a reset will begin.”
Speaking earlier this month , Cui Tiankai, the Chinese ambassador to Washington, said Beijing has been “firmly opposed, all along, to a new ‘Cold War’ or decoupling, and we are committed to the sound and stable growth of China-US relations.”
“The China-US relationship is experiencing severe difficulties rarely seen in the past 41 years of diplomatic ties,” Cui said. “This has seriously undermined the fundamental interests of the Chinese and American people.” 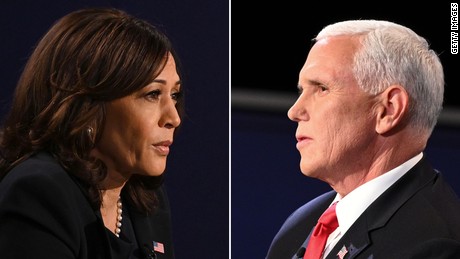 Vice presidential candidates debate foreign policy and China 13:58
But the break in relations has not only been driven by Washington, for all that Trump may have accelerated it. In part, frayed ties are a result of Beijing’s own increasingly aggressive foreign policy and its military expansionism , as well as growing international disgust at the continued human rights abuses in Xinjiang, Tibet and Hong Kong.
The coronavirus pandemic, while it hit Beijing’s standing worldwide due to initial mishandling of the Wuhan outbreak, has nevertheless provided major opportunities for China to press forward with “national rejuvenation,” restoring the country to a perceived historical position of greatness that was undone by the “century of humiliation,” during which China was laid low by colonial invasions and wars.
China was doing well economically prior to the coronavirus, despite a trade war with the US, and has weathered the storm of shutdowns and nationwide epidemics better than many other countries, particularly larger nations like the US, Brazil and India. This has for many in China, especially its leaders, vindicated the country’s political model and top-down economic management, especially as life has returned to relative normality in recent months.
The People’s Liberation Army (PLA) has expanded greatly under Xi , though the US military budget still dwarfs China . Recent months have seen aggressive moves by the PLA in the South China Sea and the Himalayas , as well as threats toward US ally Taiwan . There has also been a ramping up of propaganda around the 70th anniversary of the Korean War, known in Chinese as the “War to Resist US Aggression and Aid Korea,” even as Trump has threatened to make Beijing pay “a big price” for causing the pandemic.
By contrast, many other regional militaries, not least the US, have seen their capabilities temporarily impacted as a result of the coronavirus. On October 13, Xi inspected the PLA Navy Marine Corps during a tour of southern China, during which he urged the elite unit to “focus on war preparedness and combat capabilities,” as well as to “maintain a high level of readiness.”
“There is no possibility of a full reset of US-China relations to the Obama era because anti-China attitudes have hardened significantly in the US,” said Jeff Moon, an analyst and former US diplomat in China.
“And Chinese aggressiveness has reached unprecedented levels in the ‘Wolf Warrior’ era,” added Moon, referencing the purportedly bellicose and combative style of diplomacy adopted by Chinese diplomats in the Xi era.
Nick Marro, a China expert at the Economist Intelligence Unit (EIU), agreed that the breakdown in relations has been driven by both sides.
“China is trying to keep ties from getting worse, but without setting the stage for relations to get better,” he said. “A lot of the current bilateral friction goes beyond trade, touching on issues like Taiwan, Hong Kong, Xinjiang and the South China Sea. China sees all of these areas as its ‘red lines,’ however, while the increasingly nationalistic domestic media environment has tied the hands of China’s leaders; any backing down in policy risks being seen as capitulating to Western pressure.” 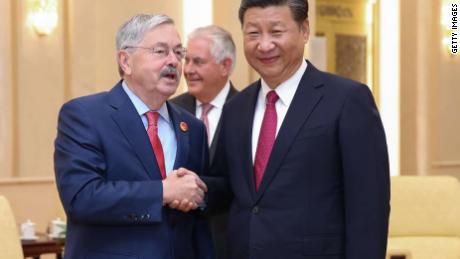 Hear from outgoing US ambassador to China on US-China relationship

Hear from outgoing US ambassador to China on US-China relationship 02:34
Most observers agree that should Biden win the presidency, as polls suggest , he will pursue a less publicly aggressive policy towards China, even if substantively, he may be just as suspicious of Beijing as Trump.
“Biden will resume the traditional practice of relying heavily on the US inter-agency community and America’s traditional allies, introducing more deliberate decision-making on US-China issues,” Moon said, in contrast to Trump’s often capricious policies toward Beijing.
“That approach will result in a more formal and predictable pattern of bilateral engagement that will help re-set the tone of relations by stabilizing the overall US-China relationship and avoid the possibility of misunderstandings that could escalate conflict.”
But he added that deeper issues will likely remain unsolved. “After decades of US-China dialogue and cooperation on the full range of bilateral issues, China has consistently refused to adopt policy changes and reforms addressing American concerns,” Moon said. “China’s formula for reset is thus unacceptable to the United States.”
Manuel agreed that a reset is “unlikely,” for all that Beijing, and potentially a Biden administration, may desire one.
“The differences are more of strategy,” he said. “Biden would push for greater use of US domestic industrial policy in the areas that the US argues China is cheating it at, and for greater use of allies.”
Any return to the soft-touch approach to China of the Clinton era is very unlikely, given bipartisan hostility towards Beijing in Washington and outrage over issues such as Xinjiang and militarizing the South China Sea.
During the 2012 presidential election, it was a topic of debate whether Russia or China was America’s biggest rival. Now, few would disagree that Beijing presents the more substantial challenge — and any retreat from this would be seen as weakness, despite the arguable failure of the current US strategy to get China to behave differently.
In a recent commentary , the state-run Chinese news agency Xinhua said that “hyping the ‘China threat’ is almost a fixed ‘plot’ in US general elections.” While Beijing has complained vociferously about being attacked by both Republicans and Democrats, this has often been with a nod to the pressures of domestic politics. China’s leaders may hope that once votes are cast, Trump or Biden might feel freer to take a softer tone.
In the past four years, Trump has blown hot and cold on China, showering Xi with praise and hailing progress towards a trade deal at one time, and casting Beijing as America’s number one enemy, responsible for all the evils in the world, at others.
This has been reflective of a divide in Trump’s inner circle between those who see the China relationship as largely an economic one, and the hawks, led by Beijing’s bête noire, Secretary of State Mike Pompeo .
Those who want to see relations repaired will be hoping for a pivot back towards the China doves in a second term Trump administration, but Marro, the EIU analyst, warned against assuming this would be likely.
“The first-phase trade deal was secured owing to President Trump’s concerns about his reelection; it was more about future tariff avoidance and the electoral blowback this could incur, rather than symbolising any real change in the US-China economic relationship,” he said.
“However, if President Trump were to be reelected, he would no longer have the political constraints of a second term. This could free him to entertain even more radical actions against China, such as broader prohibitions on investment or financial flows between US and Chinese companies. That would come at the expense of the US and Chinese economies — not to mention derailing any global economic recovery we might see next year — but those considerations haven’t stopped him before.”
Opinion in China is largely split on whether Trump or Biden would be better for the country in the long term . Ultimately, Beijing tends to prefer stability above all else, but ties could have frayed so much in the past four years that what may remain consistent is, in fact, a broken relationship.

Whether Trump or Biden wins in November, Beijing will be hoping to reset the US-China relationship have 1835 words, post on edition.cnn.com at October 26, 2020. This is cached page on Asean News. If you want remove this page, please contact us.