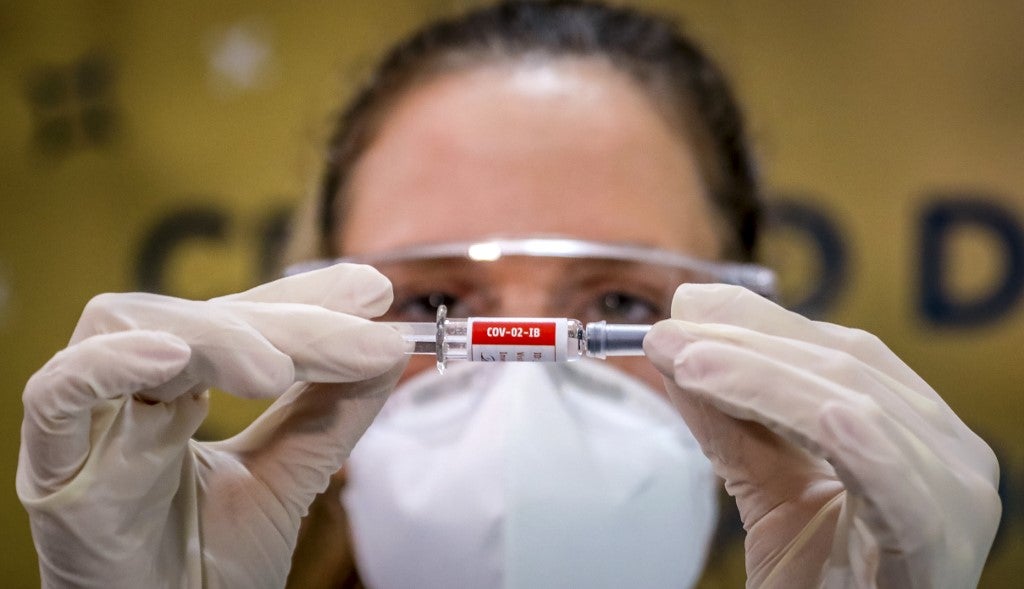 Brazil published its vaccination plan Saturday with notable holes, including a start date and details of how to reach its target of 70 percent of the population.

That prompted a new salvo of criticism of the far-right president, who has persistently defied expert advice on containing the pandemic and recently declared he did not plan to be vaccinated.

"President Jair Bolsonaro's murderous stupidity in the face of the coronavirus pandemic has surpassed all limits."

"Faced with the worst health crisis of our era, this government's response will be remembered as disastrous in every sense… right up to its vaccination plan," it said.

The plan, which the Supreme Court required the government to present, gives a rough sketch of the target populations and vaccines to be used in Brazil's initial immunization drive.

It envisions four phases targeting sensitive groups, including health workers, the elderly, indigenous Brazilians and teachers, for a total of 51.6 million people, or 24 percent of the population of 212 million.

The plan says the optimal target is to vaccinate more than 70 percent of the population but provides no details on how to reach that figure.

Experts said details on the timeline, logistics and sources of vaccines were also lacking.

Supreme Court Justice Ricardo Lewandowski ordered the government to set the start date for the vaccination drive within 48 hours.

"It would be irresponsible to give a specific date… because it depends on the registration" at Brazil's regulatory agency, deputy health minister Elcio Franco responded in a video message.

"The federal government is not going to announce anything irresponsibly."

A group of public health experts whose names appeared on the plan, meanwhile, said in a statement they had not been consulted on the final text.

"We never saw any version of this document," said one, epidemiologist Ethel Maciel.

Other experts were bluntly critical of the plan.

"The health ministry is trying to make the Brazilian people and the Supreme Court look like clowns," tweeted microbiologist Natalia Pasternak, a regular critic of the government's response to Covid-19.

She pointed out that the plan counted on 70 million doses of US pharmaceutical firm Pfizer's vaccine, even though their purchase is still being negotiated, and provided no information on how they would be stored at the required -70 degrees Celsius (-94 degrees Fahrenheit).

Even as the world's long wait for a Covid-19 vaccine reaches the beginning of the end in Britain and elsewhere, the matter is caught up in a messy political battle in Brazil.

Bolsonaro's anti-vaccine stance contrasts with that of Sao Paulo Governor Joao Doria, a top contender to challenge him for the presidency in 2022.

Doria is pushing to start immunizing people on January 25 with Chinese-developed vaccine CoronaVac, which his state is helping test and produce.

The federal vaccination plan does not include CoronaVac.

The row has escalated into what some commentators are calling a "new Vaccine Revolt," in reference to a deadly 1904 uprising against the smallpox vaccine in Rio de Janeiro.

Critics say Bolsonaro's skeptical comments are deterring many Brazilians from getting vaccinated.

Folha published a poll Sunday finding that 22 percent of Brazilians do not plan to be vaccinated against Covid-19, up from nine percent in August.

The Datafolha poll found 50 percent of respondents said they would not take a vaccine made in China, against 47 percent who would.

It also found Bolsonaro's approval rating holding steady despite the pandemic, at 37 percent — the same as in August, and the best rating of his term.

Bolsonaro, who has downplayed the new coronavirus as a "little flu," said Thursday that "we're at the tail end of the pandemic."

Experts, however, say the country is undergoing a second wave.

After a more than two-month drop, Brazil's curve of average weekly Covid-19 deaths has been rising sharply in recent weeks.

Brazil’s vaccination plan is assailed as ‘incompetent’ have 888 words, post on newsinfo.inquirer.net at December 14, 2020. This is cached page on Asean News. If you want remove this page, please contact us.