A top-level meeting between China and the United States — the first since Joe Biden became U.S. President — just wrapped up in Anchorage, Alaska, on Friday, Mar. 19.

The two days of talk ended without much breakthrough, with both sides standing their ground and continuing with their tough rhetoric.

China’s foreign policy chief Yang Jiechi’s remarks to the U.S. were carried by Chinese state media, which couched the event as a victory for the country.

Yang, a member of China’s top decision-making body, the Politburo, had said: “I think we thought too well of the U.S. We thought that the U.S. side will follow the necessary diplomatic protocols.”

An expert on the U.S. — Yang previously served as ambassador to the U.S. from 2001 to 2005 — he also said: “History will prove that those who force China into a corner will only end up getting hurt themselves.”

Yang’s assertive remarks were praised by netizens on popular microblogging platform Weibo, where nationalistic sentiments tend to get amplified.

Many interpreted his comments as a sign that China has grown sufficiently strong over the years to stand up to the U.S., which was long regarded as the world’s superpower.

Capitalising on this narrative, People’s Daily , the official newspaper of the Chinese Communist Party, posted a collage made up of a picture of the Alaska meeting, where Chinese and American officials sat facing each other on opposite sides, and a picture of China with the Eight-Nation Alliance at the signing of the Boxer Protocol in 1901. 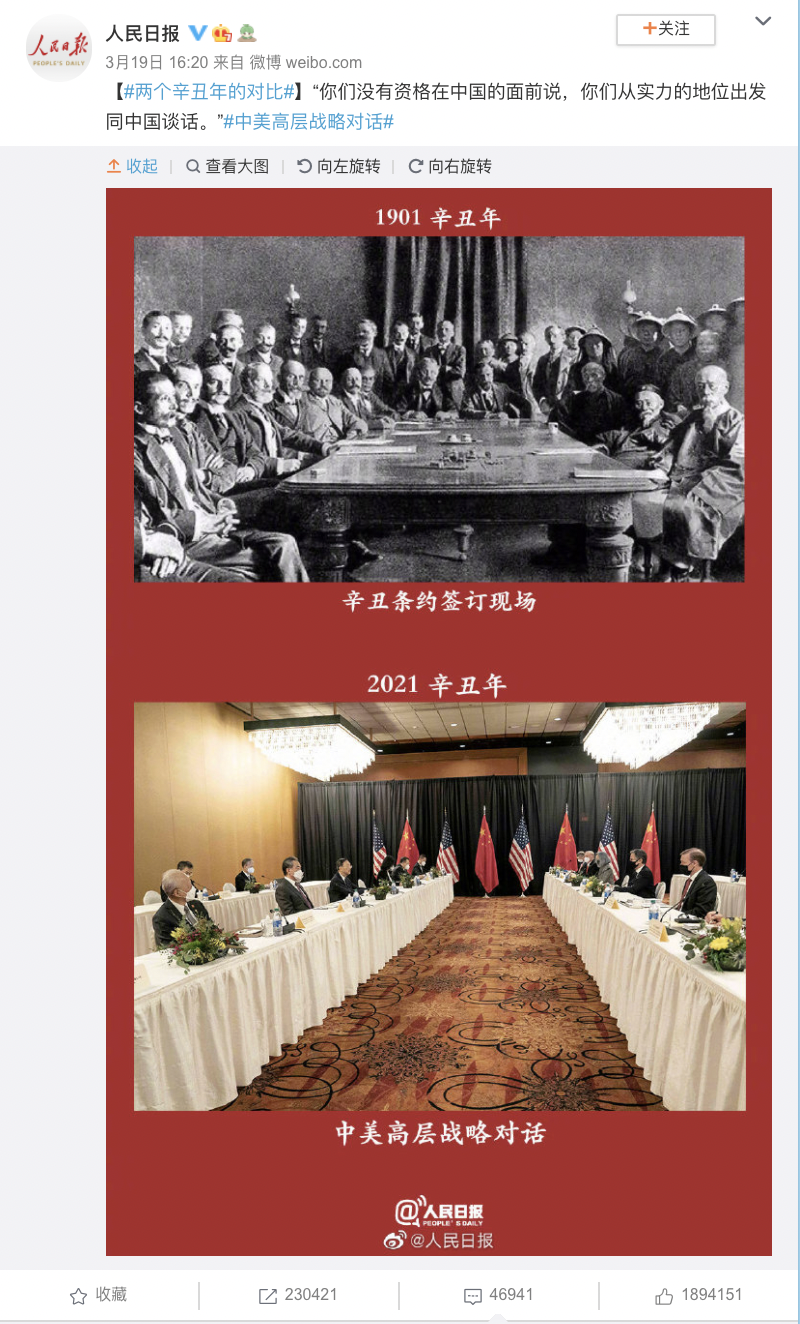 The image, which was accompanied by a quote from Yang: “In front of China, you (the U.S.) does not have the qualification to say that you want to speak to China from a position of strength”, resonated with many Chinese.

It was reposted for more than 200,000 times, and received nearly 2 million “likes” in the span of two days.

The Boxer Protocol was regarded as one of the “unequal treaties” — as China calls them — signed between China’s Qing dynasty and various Western powers, Imperial Japan, as well as the Russian Empire.

The series of treaties came to be associated with China’s “Century of Humiliation”, which was largely seen by the Chinese public as a painful chapter in China’s history, where the country was forced to concede to foreign bullies.

Today, the Chinese government frequently invokes such memories to drum up nationalistic support among its people.

Many netizens were delighted at the comparison, which provided great optics for the Party’s 100-year anniversary this year.

They expressed their joy now that China has bounced back from its position of weakness 120 years ago, as well as a sense of schadenfreude at seeing the U.S.’ relative decline.

“Two cycles of 60 years have passed, the world has remained the same, while China is no longer the old China.”

“This image will appear on history books in the future for sure.”

“I saw a comment that says: ‘A country that killed the indigenous people and made black people their slaves in order to develop. A barbaric and evil country that colonised people all over the world, killed and pillaged others with no mercy. A non-humane society that allowed tens of thousands of people to die from the Covid-19 pandemic. On both the fronts of civilisation and power, what qualifications do they have to tell the greatest civilisation in the world, China, what to do?'”

“‘Face’ is something that you gotta fight for yourself, and not receive from others.”

“What sort of courage does the U.S. have to to look down on China? Is it the strength from tens of thousands of deaths from Covid-19?”

“Put it in our history textbooks, let Chinese kids feel proud of being born in China.”

With the inconclusive meeting, neither the U.S. nor China appear to be in a hurry to cooperate with each other.

Furthermore, with domestic pressures to not give in to the other country easily — Biden is expected to keep a tough stance against China as well — bilateral tensions between the two are likely to persist.

China touts Alaska meeting with US as major win, netizens awed at China's comeback since 1901 have 1009 words, post on mothership.sg at January 8, 2021. This is cached page on Asean News. If you want remove this page, please contact us.