PERSPECTIVE: Living on a high floor and getting to select a HDB unit on a high floor has become an aspiration for many. But what is it about high-rise living that makes it so coveted in Singapore?

We find out more from several Singaporeans living above the 30th storey in HDB flats.

Living 32 storeys above, Zheng has learnt first-hand that it can get pretty windy.

In the year she has been living in the St. Georges’ Towers BTO project, she realised that it’s generally tough for indoor plants to grow well under windy conditions, given the breeziness in her living room.

But that’s a small inconvenience for Zheng and her husband to live with, considering that their home faces a glorious city view including the Sports Hub and the sea. From their bedroom, they can even see Marina Bay Sands in the distance.

“We were fortunate to be given the opportunity to [select a BTO flat with] a high floor. If there was an even higher floor, we would have been keen.”

Zheng and her husband are among the many Singaporeans who covet high-rise living – in fact, the higher the floor, the better.

High-rise residences stand as a symbol of modernity, signalling affluence and progress.

In 1950s, the tallest public housing flats in Singapore were a mere nine storeys . Fast forward over six decades later, and we have seen a rise in towering HDB projects that have more than tripled that.

As public flats rose towards the sky, at some point, so did our obsession to live among the clouds.

According to this research paper from 2006 , Singapore residents were found to be “highly adaptable” to living on high floors, as most were generally not averse to living way above ground level.

In fact, many respondents in a survey cited how higher floors are also generally associated with “privacy” and positive environmental attributes like “cleaner air” and “breeze”.

The desirability of high floors can be seen in the trend of how BTO units are snapped up as the flat selection queue moves along: The higher floors tend to be snapped up way quicker, with the balance units in a project often located on the lowest floors.

Unpleasant experiences typically associated with lower floors, such as noise or increased exposure to pests, are also well-publicised, with anxieties often seen in various forum threads discussing what it’s like to live on a low floor. 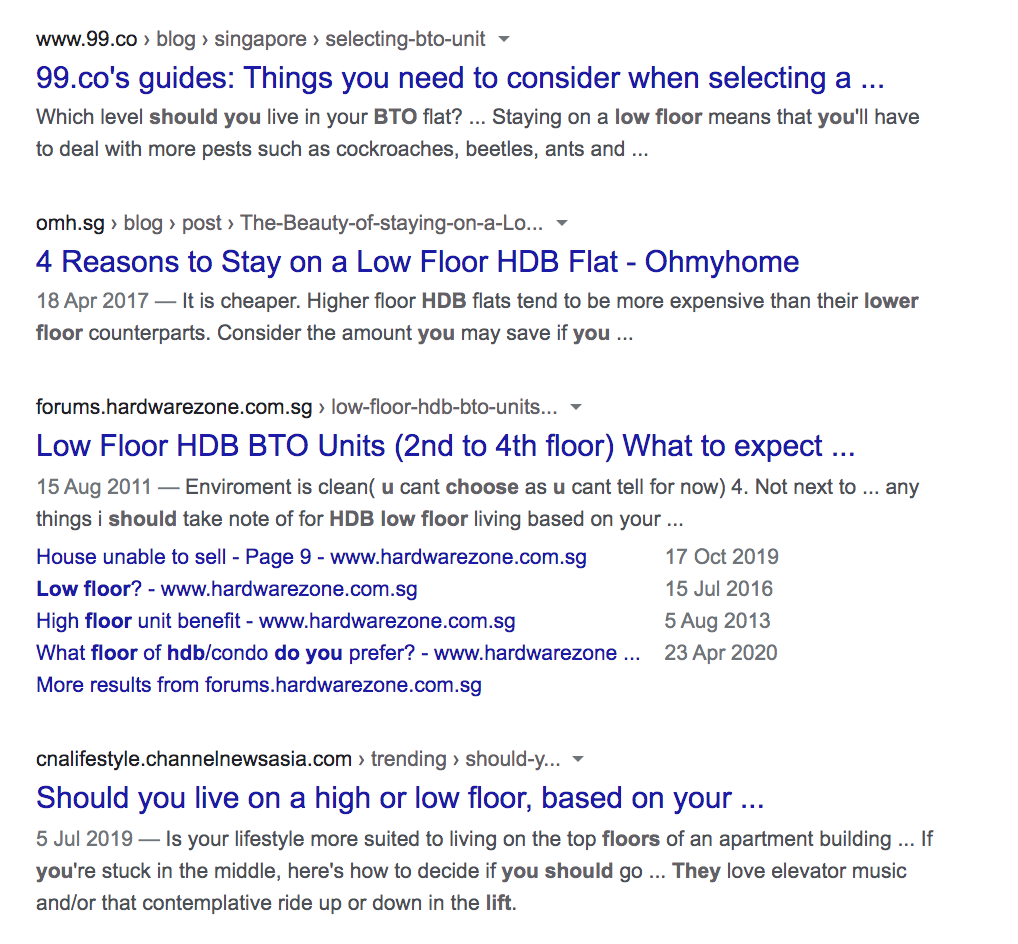 Joan, 66, who has lived on the second floor for nearly 40 years, told Mothership that she prefers living on low floors as it means that she does not have to rely on lifts. However, she admitted that there are inconveniences and downsides:

“My apartment at Commonwealth Crescent was by the staircase, and I could hear people using the stairs, talking loudly and walking past the common corridor. When I heard the loud noises and screaming, I opened the door, only to realise the neighbourhood kids are playing!

But does the unpleasantness really diminish as you go higher?

Of course, it varies, according to factors such as neighbours or the block environment. But there are some differences between living on the 3rd and 30th floor that can be generalised across most cases.

Is living on a high floor really any different?

Maurice Huang, 34, takes around 40 seconds to get from the ground level to his home on the 44th level, assuming that the lift doesn’t make any stops.

For most of the Singaporeans we spoke to living above the 30th floor, a main downside raised was the waiting time for the lifts.

Wendy Ng, who lives on a 32nd-floor HDB flat in Queenstown, said: “We only have three lifts serving a block of 43 floors, so yes.. the waiting of lifts takes time.”

When you reach the top of the flat, however, an unblocked view of the city stretching out to the horizon potentially makes it all worth it.

Huang’s level 44 flat gives him a view of Sentosa and Mount Faber, while Zheng and Koh’s Kallang Whampoa flat gives them a beautiful sunset view.

In fact, the view and the sunset is “one of the most mentally calming things,” they said.

Residing on a high floor with unblocked views also means less cover from strong winds, which can prove to be a bit of an inconvenience — “Our TV on the wall will shake,” Ng said, with Zheng and Koh adding that “more wind leads to more dust accumulated in the house”.

The upside, though, is that many of these residents do not need to rely on fans or air-conditioning to keep cool even in Singapore’s sweltering heat.

In fact, Ng said that “it gets cold” in the later part of the year as the winds coming in from her living room window can get quite strong.

Zheng and Koh share a similar experience, saying that there are significant cost savings for electricity seeing as they hardly need to turn on the fan or air conditioning.

A house (especially on a high floor) as an asset

There are many intangible upsides that living on a high floor bring — general breeziness, a stunning view and potentially decreased exposure to pests.

The height also translates to very material differences when you consider the fact that the higher you go, the more expensive it gets.

All three Singaporean couples we spoke to either purchased their flat under the BTO scheme, in which they had the opportunity to select a high floor, or were fortunate enough to be part of the Selective En Bloc Redevelopment (SERS) scheme.

In new BTO projects, higher floors are typically sold for higher prices, with a difference of anywhere between S$3,000 to S$7,000 for each floor.

There are other factors that affect flat price, such as size, orientation and proximity to amenities, but in general, the price difference between the lowest and highest floor could be nearly S$100,000 for a four-room flat located above 30 storeys.

“Higher prices are justified if it comes with a better view. But if your view is facing other flats, it seems like a waste.” Ng, whose flat has an unblocked view of the Queenstown area, said.

Huang cited resale value as a reason for going for high floors, agreeing that they would have gone for an even higher floor for their Dawson flat if it was available.

Huang and his wife are forking out S$485,000 for their level 44 four-room flat (which was eventually completed in 2015), an option which they found manageable during the 2009 BTO exercise.

Would they have paid for the same unit if it was on the resale market though? “No.”

Ng, who said they would not have purchased a similar unit on the resale market, added that they selected a high-floor because of a very practical reason: resale value.

“I will most likely not want to live below level six but will not insist to stay above 30 given the high price. The true value only comes when you sell your house.”

Things can look rather different when you take reselling the house out of the equation, though.

For 66-year-old Joan, who is perfectly content with living on the second floor, said: “It costs less for a lower floor, so why pay more for the same sq ft [area]?”

The resale value has never bothered her as she intended to make every house a permanent home: “I did not consider resale value for [my] Hougang and Bishan flats because there was no plan to sell it off.”

Zheng and Koh, who applied for their flat during the 2014 BTO exercise, are paying around S$560,000 for their four-room flat. Currently, they have only been living there for a year.

Another BTO project in the area which was built in 2012, Bendemeer Light, has seen a three-room flat recently being sold for S$650,000 .

Four-room flats are also being listed with an even higher asking price, with some over S$900,000.

For Zheng and her husband, they said they might have considered purchasing the Kallang Whampoa flat on the resale market, if they “plan[ned] to live in the house long-term, for at least 10 years”.

After all, “value” is relative: If you can afford a unit in a great location and on a high floor, why not?

The 'true value' of high HDB floors, according to S'poreans living above 30 storeys have 1639 words, post on mothership.sg at January 8, 2021. This is cached page on Asean News. If you want remove this page, please contact us.