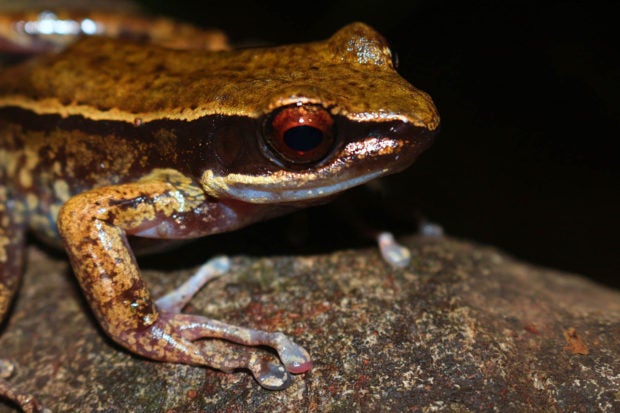 MT. BUSA'S ELUSIVE INHABITANT Guttman's stream frogs were perched on branches near streams deep in the forest of Mt. Busa in southern Mindanao when a team of wildlife biologists and T'boli guides found them in September 2020, 27 years after the species was first discovered. —CONTRIBUTED PHOTO

MANILA, Philippines — After nearly three decades of zero sightings — lea­ding to the belief that it may have gone extinct — the rare Guttman's stream frog (Pulchrana guttmani) was rediscovered by a young wildlife biologist deep in the forest of Mt. Busa in southern Mindanao, one of the Philippines' least studied forest areas.

The shiny frog, no bigger than the palm of a hand, had eluded scientists who have been conducting extensive fieldwork in several regions in Mindanao since the 1990s. A "serendipitous encounter," as Kier Mitchel Pitogo described it, led to the first sighting of the amphibian 27 years after it was first discovered in 1993.

"It's really challenging to find a lost species," said Pitogo, who lives in Koronadal City, in a phone interview. "Unlike with new species, when you go to a forest, it's almost guaranteed you can find new ones."

Rediscovering lost species, or at least those that have not been spotted for a long time, happens "once in a blue moon," said the 25-year-old biologist. For Pitogo, his quest for the Guttman's stream frog was one born out of curiosity: "For me, it felt like it was an impossible task, but I just wanted to try."

His curiosity was finally satisfied in September 2020, when along with his research partner Aljohn Jay Saavedra and their local guides from the indigenous T'boli, they found at least four of these frogs near the streams of Bulul Tbotu in Lake Sebu, a high-elevation area that is difficult to reach.

The rare and mysterious Guttman's stream frog was first discovered in 1993 by American herpetologist Rafe Brown, in what could be described as a rescue operation for amphibians during a huge logging operation on the southern slope of Mt. Busa, the highest peak in Sarangani province. Amid the destruction of their habitat, several frogs were saved for examination and identification. One of them, unknowingly, was the Guttman's stream frog.

In describing a new species, at least 10 individuals are examined to characterize and identify them as different from what is already known by the scientific community. In the case of the Guttman's stream frog, all scientists had was a single specimen. Despite this, it was formally described by Brown in 2015, more than a decade since its first sighting, in an attempt to protect the mysterious species.

In their own paper published in Herpetology Notes in January, Pitogo and Saavedra wrote: "To date, P. guttmani has the most restricted geographic range of any Philippine ranid frogs. It is the only Philippine frog for which no known sightings of living individuals have been documented since its original discovery."

Pitogo first learned of the rare frog in 2017, when he was a graduate student of wildlife studies at the University of the Philippines Los Baños. He decided to dedicate his graduate work to finding the amphibian, combing through the southern slope of Mt. Busa facing Sarangani province, where Brown had found the only proof of its existence.

His efforts between June 2018 and August 2020, however, proved unsuccessful, even though he went to trails and streams that had yet to be accessed by anyone else. "There were many times when I thought that maybe the Guttman's stream frog was already extinct," Pitogo said.

Luck on his side

After finishing his graduate studies, he worked as a wildlife biologist for the Department of Environment and Natural Resources in South Cotabato. He then found himself back on Mt. Busa, this time on the northern slope to survey the forest and prepare the protected area suitability assessment of the Allah Valley Protected Landscape.

As their small team set up camp near a stream at an elevation of 1,400 meters above sea level on the night of Sept. 2, 2020, two of their T'boli guides collected frogs for dinner. It was then that Pitogo noticed that one of the frogs looked different: it had a shiny golden brown body with small dark spots on its back and an iridescent bluish gray underbelly.

Pitogo asked their guides to bring them to the spot where they had found the amphibians. There, beside a fast-flowing stream, they spotted a small population of the elusive frog, perched on overhanging branches in a hard-to-reach area.

The Guttman's stream frog, observed Pitogo and Saavedra, has characteristics very similar to another big-eyed frog, the Pulchrana grandocula. But it is distinguished from its cousins by its wider finger pads and larger, brightly colored body.

After three years of painstaking fieldwork, Pitogo said it was a special find since the frog may be considered one of the rarest, if not the rarest, amphibians in the Philippines.

With no frogs observed in other streams at an elevation of below 1,400 meters, researchers suggested that the Guttman's stream frog may be a "high-elevation specialist." It may also have little to no tolerance to disturbance, they said, explaining its absence from areas that had been destroyed or altered by logging activities and abaca plantations.

Biologists rediscover rare frog after 27 years have 1042 words, post on newsinfo.inquirer.net at March 8, 2021. This is cached page on Asean News. If you want remove this page, please contact us.