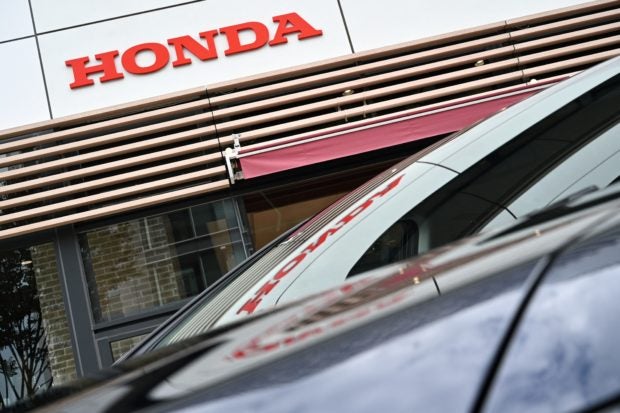 A Honda logo is pictured as cars are displayed outside a Honda showroom of company's headquarters in Tokyo on November 6, 2020. (Photo by Philip FONG / AFP)

TOKYO, Japan  – Honda launched the world's most advanced self-driving car licensed for the road on Friday, releasing an initial batch of 100 models in Japan.

The Legend is capable of adaptive driving in lanes, as well as passing and switching lanes under certain circumstances.

The car also features an emergency stop function in case a driver is unresponsive to handover warnings, and Honda touts extensive safety testing.

"Approximately 10 million patterns of possible real-world situations were simulated during system development, and real-world demonstration tests were conducted on expressways for a total of approximately 1.3 million kilometres (800,000 miles)," it said in a statement.

Experts said the limited rollout would help determine whether there is sufficient demand for more autonomous vehicles.

Vehicle autonomy is classified along a 0-5 scale, with 5 indicating essentially total autonomy. The Legend is Level 3.

Several automakers have already manufactured vehicles capable of Level 3 autonomy, but few countries have legal frameworks permitting their sale and use.

The government had already amended the law to allow for such vehicles, believing self-driving cars will be key in a country with a rapidly ageing population in need of safe transportation solutions.

Automakers and tech firms are locked in a fierce battle for the lead in self-driving technology, with electric carmaker Tesla among the challengers.

For now, analysts say automakers are still a long way from a true Level 4 system, in which a car is considered to no longer have a driver, just passengers.

Level 5 vehicles would theoretically have no steering wheel or other driver controls and would be capable of handling all terrain types and weather without driver assistance.

Honda's limited release of the Legend will be available only for lease sales. The partially self-driving sedan is priced at 11 million yen ($102,000).

Honda launches advanced self-driving cars in Japan have 532 words, post on technology.inquirer.net at March 5, 2021. This is cached page on Asean News. If you want remove this page, please contact us.