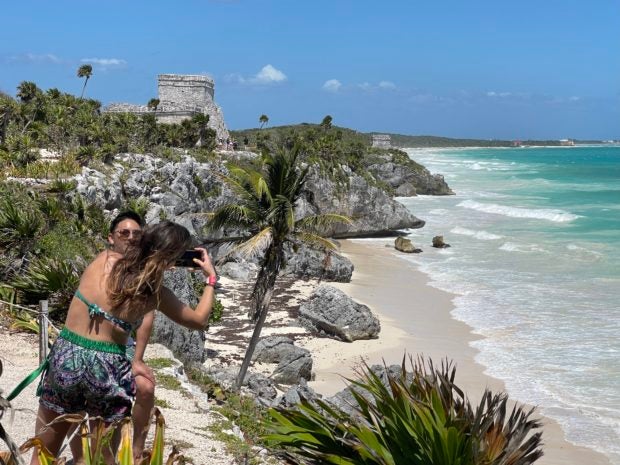 In this file photo taken on March 09, 2021, tourists enjoy the Pre-Columbian Mayan site of Tulum, built on the eastern coast of the Yucatan Peninsula on the Caribbean Sea, in the Mexican state of Quintana Roo. (Photo by Daniel SLIM / AFP)

TULUM, Mexico  – Tourists writhe their bodies to pumping techno beats on dance floors along Mexico's Caribbean coast — a magnet for people from around the world who want to party during a pandemic.

The Latin American country is among those worst hit by Covid-19 with a death toll fast approaching 200,000.

But such worries seem a world away in tourist resorts like Tulum and Cancun, where visitors can dance late into the night at discos, electronic music festivals and invitation-only parties.

Once a sleepy fishing village, Tulum now attracts international tourists lured by its turquoise waters, Mayan ruins and the chance to party next to lush jungle, freshwater sinkholes and golden beaches.

"The coronavirus thing is nonsense. Life must go on," said Greta from Spain who described the rave she attended in December as "amazing."

"The party in Tulum was magical — a combination of the jungle, rituals, the sea breeze," she said.

But what is a dream for Greta is a nightmare for many others, leaving the town facing accusations that it is putting lives at risk by allowing mass gatherings with lax sanitary measures.

Mexico is one of the few major tourist destinations not to have closed its borders or demanded a negative coronavirus test result on arrival.

That has ensured that the plane-loads of visitors keep coming, making Mexico the third-most visited country in the world last year.

In destinations like Cancun, hotels offer incentives such as free Covid-19 tests and discounts for guests if they are infected and forced to extend their stay in order to quarantine.

Tulum made international headlines in November when 50 attendees were infected at Art With Me, Mexico's version of the Burning Man festival that was quickly dubbed a super spreader event.

As a result, organizers of the Zamna electronic music festival were forced to pull the plug on the 16-day series of events that was supposed to start in December.

Ticket holders who paid up to $300 for a night dancing to international DJs and techno music acts will now have to wait until April — and bring a mask.

"Sadly, the image of Tulum is being affected, in the eyes of the world, by the negligence of some entrepreneurs to organize events without respecting health and safety protocols," the organizers said.

Lower-key events continue to go ahead, with more than 20 private parties organized in the past two weeks, according to messages in WhatsApp groups promoting them.

Quintana Roo, the southeastern state home to Tulum, Cancun and the Riviera Maya, is now at yellow status — the second highest of four under the country's traffic-light system.

Bars, discos and mass events are — in theory — forbidden from operating in the area, where hundreds of thousands of visitors are expected during the Easter period.

The hotel industry is unhappy that parties continue to be held in secret.

Such events are a "stain" on the area's image, said David Ortiz, president of the Tulum Hotel Association.

An agreement has been signed with the municipal council and a "citizens' initiative" will be presented to the local Congress to toughen punishments for anyone flouting the rules.

That does not seem to worry the members of the WhatsApp group Eddy's Tulum Party Squad where people can keep up to date with the nightlife events calendar.

In Cancun's nightlife district, the music from the discos is deafening even during a pandemic, although there are fewer customers than before.

Venues have found a way around the restrictions by reinventing themselves as "restaurant-bars."

Ecuadorian tourist Alexandra Freire was astonished when the restaurant where she was dining one night suddenly turned up the music and customers began dancing without masks.

"It is the most shocking thing I've seen in the pandemic. It's as if Covid never reached Cancun," said the 35-year-old engineer.

Stopping big parties is a "real battle" that sometimes ends in defeat, said Dario Flota, a representative of Quintana Roo's tourism promotion board.

Some visitors even fly home unaware they have the coronavirus.

They had boarded the plane to Buenos Aires with negative test results from a clinic that turned out to be unlicensed and has since been shut down.

Tourists in Mexico party like there’s no COVID-19 have 979 words, post on newsinfo.inquirer.net at March 21, 2021. This is cached page on Asean News. If you want remove this page, please contact us.