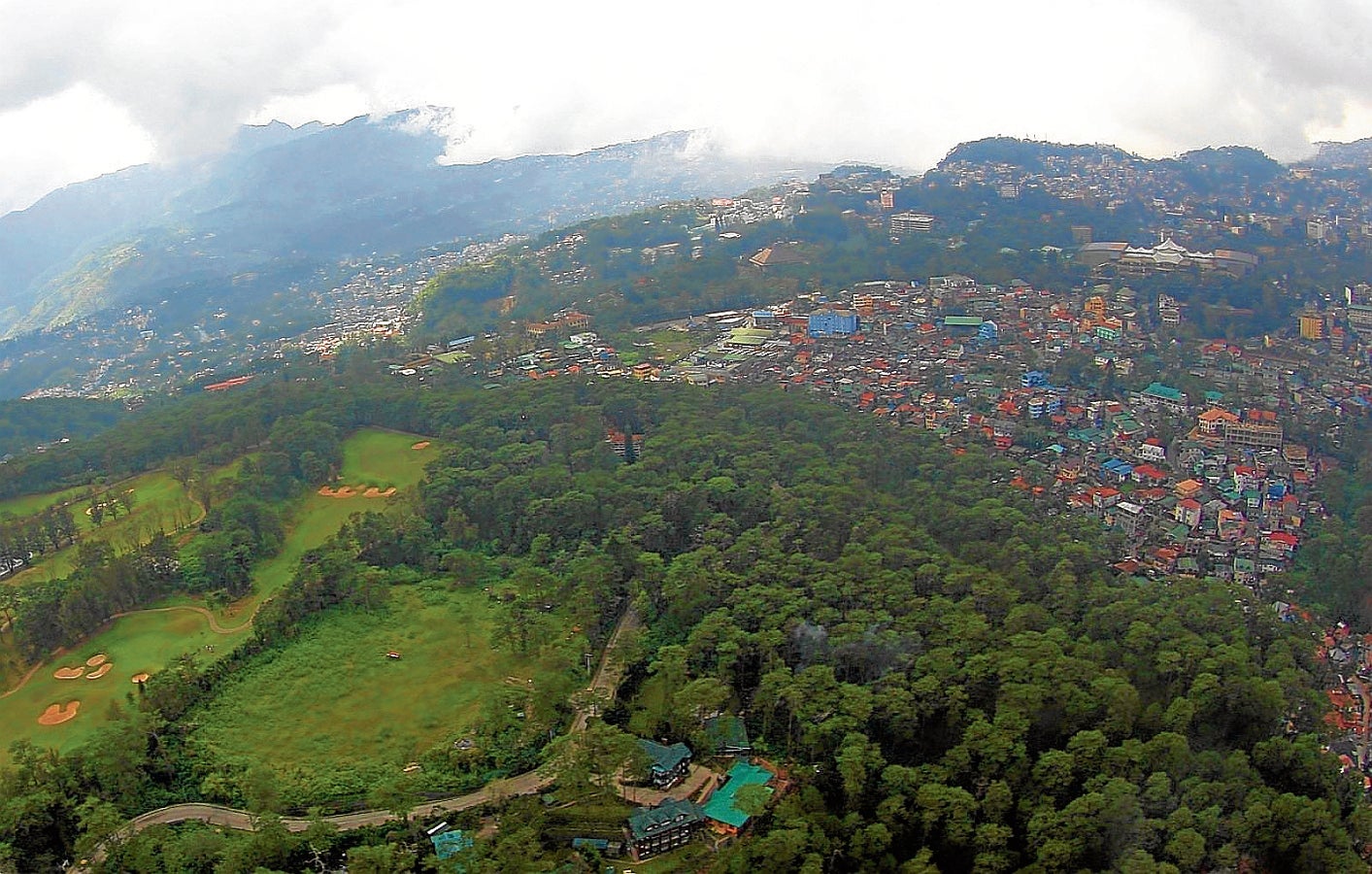 LAST STAND  – The vast forest at Camp John Hay is one of the biggest clusters of pine cover remaining in Baguio City. Plans are underway to replenish watersheds, and build new forests and tree parks in pockets of idle land in the City of Pines. —EV ESPIRITU

BAGUIO CITY—Ancestral land titles issued inside Camp John Hay, including Baguio's only ancestral domain, are not recognized by the Bases Conversion and Development Authority (BCDA), which claims to be the true owner of the former American rest and recreation center here.

The BCDA insisted on its administrative and proprietary rights over Camp John Hay, as it was already a military facility of the United States in the early 1900s, way before the 1997 law recognizing indigenous peoples (IP) rights was enforced, said Elvira Estanislao, BCDA senior vice president and head of its legal department.

Created by Republic Act No. 7277, the BCDA has "vested rights" over all former US military camps that it is tasked to develop into economic growth centers, she said.

Estanislao also confirmed that the Office of the Solicitor General had asked the Supreme Court to nullify all Ibaloy land titles issued by the National Commission on Indigenous Peoples (NCIP) inside the 600-hectare Camp John Hay reservation.

She made these disclosures during the city council session this week.

Councilors Arthur Allad-iw and Isabelo Cosalan, however, told the BCDA that the Ibaloy land claim was one of the 19 conditions set by the Baguio government in 1995, in exchange for the city's endorsement of the privatization plans for Camp John Hay then.

The recognition of land claims by IPs inside Camp John Hay is a fifth condition of City Resolution No. 362, which was approved in 1994.

Aileen Zosa, BCDA executive vice president, said the agency would abide by all of its commitments to Baguio, but within the bounds of the law.

Saying she took part in the development of a master plan for Camp John Hay's redevelopment in 1994, Zosa said the BCDA would comply with all the conditions "for as long as they do not contradict laws like RA 7227 (the BCDA law, which had since been amended)."

"BCDA has vested ownership over these properties. BCDA can't abdicate its role as owner [of Camp John Hay]," she said.

Estanislao said that BCDA "as landowner was not informed" when the IP titles were processed and issued, which she said violated due process.

She said BCDA had no explicit guidelines as to how it would treat the Ibaloy and other IP groups living inside the Camp John Hay reservation.

Between 2012 and 2014, efforts to resolve this impasse were undertaken by the NCIP and the John Hay Management Corp., the BCDA subsidiary that oversees Camp John Hay.

In a 2019 land summit, the NCIP said it had reviewed 581 ancestral land claims in Baguio, some of them inside the former American base.

Vice Mayor Faustino Olowan said that among the conditions that were already being processed by the BCDA under previous administrations was the segregation of 14 barangays (villages) now found inside the Camp John Hay reservation.

One of these villages is Happy Hallow, which was granted a certificate of ancestral domain title (CADT) in 2006, in recognition of Baguio's Ibaloy-Kankanaey community that existed before the summer capital was designed and built by the American colonial government.

In 2019, however, the Supreme Court applied a provision of Republic Act No. 8371 (Indigenous Peoples Rights Act of 1997 or Ipra), stating that the NCIP may not issue certificates of ancestral land titles (CALTs) or CADTs within Baguio's townsite reservation.

In one of the last decisions penned by retired acting Chief Justice Antonio Carpio, the high court cited Section 78 of the Ipra, which allows Baguio to be governed by its 1909 Charter when it invalidated the CALT issued in 2010 to the heirs of Cosen Piraso and Josephine Abanag.

Their CALT overlaps with the presidential mansion, Wright Park and a prewar hotel, and were among five CALTs questioned by the Baguio government and by an NCIP investigating team for procedural anomalies.

A 1909 US Supreme Court ruling involving Camp John Hay, however, is the foundation of the country's IP laws and a provision in the 1987 Constitution. Called the Native Title Doctrine, the court recognized the land rights of Ibaloy clan leader Mateo Cariño over sequestered military lands that became Camp John Hay.

BCDA not recognizing ancestral lands in Camp John Hay have 821 words, post on newsinfo.inquirer.net at April 10, 2021. This is cached page on Asean News. If you want remove this page, please contact us.