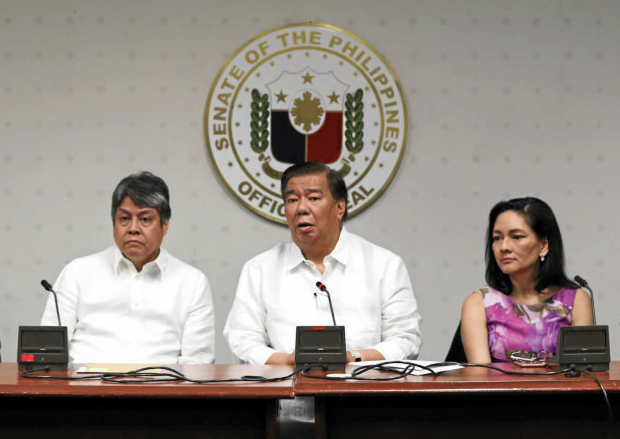 MANILA, Philippines — Opposition senators on Wednesday took up the cudgels for members of the Senate union after they were red-tagged by no less than the head of the National Intelligence Coordinating Agency (NICA), the primary intelligence-gathering and analysis arm of the government.

"We strongly condemn the red-tagging of the union of Senate employees and we vehemently denounce government officials who continue to label, brand, vilify, and harass individuals and organizations such as SENADO as state enemies and subversives," a joint statement signed by Senate Minority Leader Franklin Drilon, Senator Risa Hontiveros, Senator Leila de Lima and Senator Francis Pangilinan read.

The senators vouched for the SENADO as an organization that "upholds the interest and welfare of Senate employees, not of any other group."

"We have been in the Senate long enough and we can attest that the SENADO union never acted as the 'eyes and ears of the CPP-NPA-NDF in the Senate to hijack plans and programs of the government' These are dangerous allegations to make," the senators said.

The lawmakers issued a statement in reaction to a Facebook post of NICA Director-General Alex Monteagudo stating that the Senate of the Philippines "is manned" by a front organization for the Communist Party of the Philippines.

SENADO denounced the allegation, saying it was made after it came up following a memorandum by the Department of Interior and Local Government against progressive organizations.

"We firmly believe that such blatant attack against the union, which is a legitimate organization of Senate employees , is a response to our position denouncing the memorandum issued by the Department of Interior and Local Government on the red-tagging of legitimate and progressive organizations and public sector unions, and for supporting COURAGE as an affiliate member," SENADO added.

The senators said that Monteagudo and Undersecretary Lorraine Badoy's malicious attacks on Senate employees must not be taken lightly.

The minority senators backed the Senate union's position, saying like COVID-19, "we must prevent red-tagging from further spreading."

"The lack of general condemnation and a law which penalizes red-tagging as a crime embolden these government officials and only normalize this prevailing culture of red-tagging," they said in the statement.

"Thus, we find it unfortunate and utterly deplorable that there are officials who resort to red-tagging" the senators further said.

Likewise, the senators called for the immediate passage of Senate Bill 2121 or the proposed "Act Defining and Penalizing Red-Tagging."

"We believe that the passage of this bill will serve as a deterrent against red-tagging. We should punish irresponsible officials who act as enablers of red-tagging," the senators said.

Minority senators say red-tagging of Senate workers ‘tantamount to attack on the Senate’ have 684 words, post on newsinfo.inquirer.net at April 7, 2021. This is cached page on Asean News. If you want remove this page, please contact us.