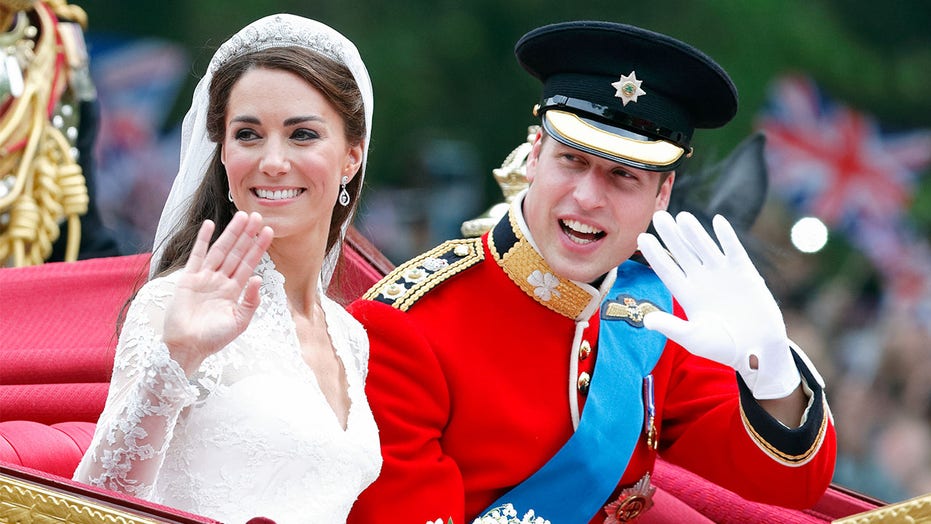 Martin and Sue Fidler were stunned when they saw local Kate Middleton of Bucklebury walk down the aisle to marry Prince William , the future king of England.

The Duke and Duchess of Cambridge tied the knot in 2011. They are parents to three children: Prince George , 7, Princess Charlotte , 5, and Prince Louis , 3.

“Everything outside just roared,” Martin recalled to People magazine on Wednesday. “You could hear it all outside to begin with as she approached. It was like a wave of sound getting louder and louder as she got closer to the Abbey. When the trumpets started inside to announce that she'd arrived, it's a wonder the roof didn't lift off!”

According to the couple, the excited crowd screamed as Middleton, 39, made her way inside London's Westminster Abbey.

Catherine, Duchess of Cambridge and Prince William, Duke of Cambridge (wearing his red tunic uniform of the Irish Guards, of which he is Colonel) travel down The Mall, on route to Buckingham Palace, in the 1902 State Landau horse-drawn carriage following their wedding ceremony at Westminster Abbey on April 29, 2011, in London, England. The marriage of Prince William, the second in line to the British throne to Catherine Middleton was led by the Archbishop of Canterbury and was attended by 1900 guests, including foreign Royal family members and heads of state. Thousands of well-wishers from around the world have also flocked to London to witness the spectacle and pageantry of the royal wedding. (Max Mumby/Indigo/Getty Images)

“When Kate came in – what a wonderful sight,” said Martin. “She looked incredible. And she hasn't changed a bit in ten years.”

The outlet shared that when the Fidlers returned to Bucklebury that evening, there were hundreds of people on the village green still celebrating. They toasted to the occasion by heading to the Bladebone Inn for champagne.

“There was music playing and they were all having drinks to celebrate, but I crept off after a little while and went home for a rest,” Sue admitted.

Still, the couple said it was one of the most unforgettable moments of their lives.

The Duke and Duchess of Cambridge are celebrating their 10th wedding anniversary on April 29. (Photo by Mark Cuthbert/UK Press via Getty Images)

“I've still got my outfit and my fascinator,” Sue boasted. “I can't see that I'll ever throw them away because it was such a special day. It was a total one-off.”

Middleton and William, 38, met as students at the University of St. Andrews in Scotland. They dated for eight years before becoming engaged in 2010 while vacationing in Kenya, Africa. William's younger brother Prince Harry served as the best man at the royal wedding. They now reside in Kensington Palace.

According to History.com , some 1,900 guests attended the ceremony, while another 1 million spectators lined the streets of London.  An estimated 2 billion people worldwide watched the televised wedding.

Prince William, Kate Middleton’s wedding guests say ‘everything outside just roared’ during televised ceremony have 676 words, post on www.foxnews.com at April 28, 2021. This is cached page on Asean News. If you want remove this page, please contact us.