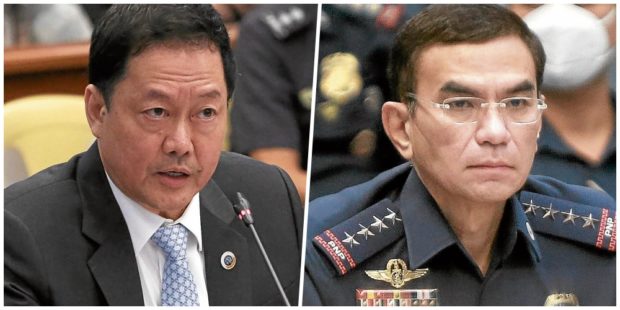 MANILA, Philippines — The new chief of the Philippine National Police has allowed the Department of Justice (DOJ) to check the records of at least 61 police operations that resulted in the deaths of drug suspects, Justice Secretary Menardo Guevarra said on Monday.

Police Gen. Guillermo Eleazar's move ended his predecessors' policy that, Guevarra said, made it "rather difficult" for a DOJ-led review panel to carry out President Duterte's order to look into the government's bloody drug war, Guevarra said.

Eleazar took the helm of the 220,000-strong PNP on May 7, replacing Police Gen. Debold Sinas who retired.

Human rights groups have condemned the killing of hundreds of people in the drug war. The United Nations Human Rights Council (UNHRC) has described the Philippines' human rights situation as near impunity as the antidrug operations supposedly targeted innocent individuals.

"The decision of the new PNP chief … is a very significant milestone in the government's efforts to exact accountability," Guevarra told the Inquirer.

"While eradication of the illegal drug scourge remains a top priority of the present administration, it is also its major concern to conduct this campaign in the proper way and preserve its legitimate character," he said.

Guevarra said at least 61 cases were already investigated by the Internal Affairs Service of the PNP, the primary law enforcement agency that implemented Mr. Duterte's brutal crackdown on the illegal drug trade.

On June 30 last year, the justice chief announced in a video speech to the 44th UNHRC meeting that the DOJ-led interagency panel was created to evaluate 5,655 police anti-drug operations that resulted in deaths.

The panel is also made up of the PNP, Presidential Communications Operations Office, Department of the Interior and Local Government, Department of Foreign Affairs, Presidential Human Rights Committee Secretariat, Presidential Management Staff, Dangerous Drugs Board, Philippine Drug Enforcement Agency (PDEA), and the National Bureau of Investigation.

The Commission on Human Rights (CHR) was to be involved as an independent monitoring body. But in January, the CHR called out the government for its exclusion from the review.

Guevarra had told the UNHRC that the families of drug war victims would be provided legal assistance in prosecuting law enforcers "who have overstepped legal bounds in their operations." He said the new mechanism would "tighten the web on existing mechanisms to prevent cases of impunity."

Human rights groups have criticized the review panel as "deeply flawed" and a "ruse to shield the country from international scrutiny" because the police and the PDEA are among its members.

In February, Guevarra reported to the UNHRC that half of the police operations covered by the review "failed to follow standard protocols pertaining to coordination with other agencies and the processing of the crime scene."

But he cited claims by the PNP that many drug suspects were killed because they "resisted arrest or attempted to draw a weapon and fight back."

The CHR came out with its own report in March, saying the PNP used "excess, unreasonable" force and had the "intent to kill" suspects during drug-related operations in the past four years.

Guevarra said he met last week with Eleazar to talk about closer coordination between the DOJ and the PNP in the investigation of supposed extrajudicial killings of drug suspects.

The agencies will sign a memorandum of agreement soon, he said, reiterating his department's support for the PNP's efforts to cleanse its ranks of scalawags.

"Eleazar expressed his sincere intention to cooperate with the DOJ in order to remove or discipline wrongdoers among the ranks of the police and thereby uplift the image of the PNP as protectors of the people," Guevarra told reporters in a Viber message.

"What is significant right now is that the DOJ has been given free access, something that did not happen in previous years, thereby making our review rather difficult," Guevarra said.

Asked why it took several years before the PNP let the DOJ access its records, the justice secretary replied: "It all boils down to a question of political will—the will to do what is right."

Guevarra admitted that convincing witnesses to testify against erring policemen behind the killings of drug suspects would be an obstacle for state prosecutors.

"Save in a few sensational cases, the biggest challenge to the criminal investigation [and] prosecution process is, and has always been, the willingness of witnesses to appear and testify," he said.

—WITH A REPORT FROM INQUIRER RESEARCH

PNP opens records of drug deaths to DOJ scrutiny have 1130 words, post on newsinfo.inquirer.net at May 25, 2021. This is cached page on Asean News. If you want remove this page, please contact us.