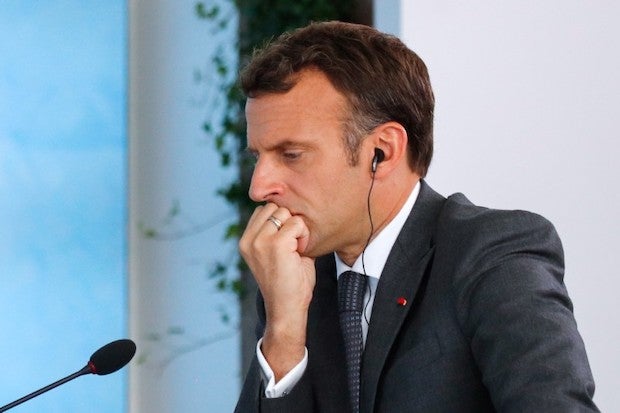 CARBIS BAY, France — President Emmanuel Macron on Sunday said that France respects Britain's sovereignty, but it is time to end rows over sausages and focus on more serious issues.

Tensions between Britain and the European Union over their Brexit deal exploded into an open war of words on Sunday, with both sides accusing the other of sowing disharmony at the Group of Seven summit.

"My wish is that we succeed collectively in putting into action what we signed several months ago," Macron told a news conference at the G7 leaders' summit. "Let's not waste time with controversies that are created in corridors and backrooms."

Prime Minister Boris Johnson asked Macron during a meeting how he would feel if Toulouse sausage makers could not sell their products on Paris markets, drawing a comparison with northern Ireland sausage makers.

"On this subject, we all need to stay calm," Macron told reporters at the end of the summit. "We have in France many towns, regions, and protected appellations where we make sausage. We're proud of it, and we love it," Macron said in jest.

"There is Toulouse sausage, we talked about it, but we have many more. I don't want problems with Montbeliard, Strasbourg, or other regions, we defend French gastronomy in all its diversity," he added.

But on accusations from the British government that he had said northern Ireland was not part of the same country as the United Kingdom, he said:

"France never took the liberty to question the sovereignty, the territorial integrity of the United Kingdom."

"I remember that when Boris Johnson came to power, he didn't want to keep the backstop, which was defended by Theresa May," he added. "Prime Minister Boris Johnson knew very well then that an issue of controls would be posed and he signed a protocol for northern Ireland that provided for these controls."

Macron: We love sausage, but let’s not waste time on this have 645 words, post on newsinfo.inquirer.net at June 14, 2021. This is cached page on Asean News. If you want remove this page, please contact us.