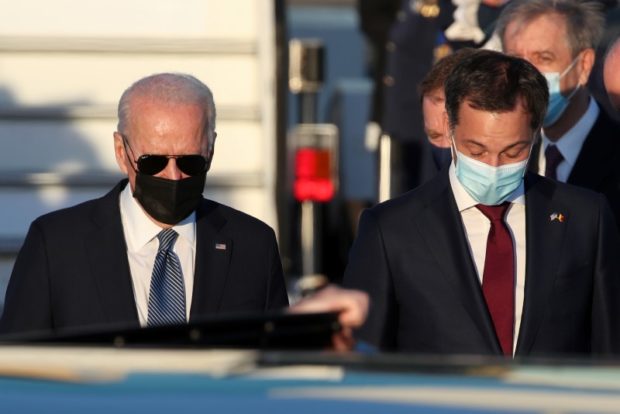 BRUSSELS — NATO leaders are expected to brand China a security risk to the Western alliance on Monday, a day after the Group of Seven rich nations issued a statement on human rights in China and Taiwan that Beijing said slandered its reputation.

In a marked change of tone from his predecessor Donald Trump, Biden on Sunday described NATO as "a sacred obligation".

Arriving at the one-day summit in Brussels, Stoltenberg said China's growing military presence from the Baltics to Africa meant NATO had to be prepared to stand up for Western security and democratic values.

"China is coming closer to us. We see them in cyber space, we see China in Africa, but we also see China investing heavily in our own critical infrastructure," he said, a reference to ports and telecoms networks.

"We need to respond together as an alliance."

Diplomats said the NATO summit's final communique would not call China an adversary – and Stoltenberg said China was not an enemy – but would demonstrate concern, calling it a "systemic" challenge to Atlantic security as it joins Russia with military drills, launches cyber attacks and rapidly builds up its navy.

G7 nations meeting in Britain over the weekend scolded China over human rights in its Xinjiang region, called for Hong Kong to keep a high degree of autonomy and demanded a full investigation of the origins of the coronavirus in China.

China's embassy in London said it was resolutely opposed to mentions of Xinjiang, Hong Kong and Taiwan, which it said distorted the facts and exposed the "sinister intentions of a few countries such as the United States".

"China's reputation must not be slandered," the embassy said on Monday.

British Prime Minister Boris Johnson, arriving at the summit, said there were both risks and rewards with Beijing.

"When it comes to China, I don't think anybody around the table wants to descend into a new Cold War with China," he said. "But I think people see challenges, they see things that we have to manage together, but they also see opportunities."

Since Russia's 2014 annexation of Crimea, NATO has modernized its defenses but has only recently begun to look more seriously at any potential threat from Chinese ambitions.

From Chinese investments in European ports and plans to set up military bases in Africa to joint military exercises with Russia, NATO is now agreed that Beijing's rise deserves a strong response.

But members are mindful of their economic links with China. Total German trade with China in 2020 was over 212 billion euros ($256.82 billion), according to German government data, making Beijing the top trade partner in goods.

Russia's efforts to divide the West will meanwhile run through discussions, diplomats said, ahead of a meeting between Biden and Russian President Vladimir Putin on Tuesday in Geneva.

Lithuanian President Gitanas Nauseda said that Russia was trying to "swallow" Belarus and that NATO needed to be united in deterring Moscow.

"Belarus is losing the last elements of the independence, and those trends are very dangerous," Nauseda said on arrival.

Given the threats, leaders hope to hear Biden recommit the United States to NATO's collective defence after Trump's confrontational rhetoric towards allies from 2017 to 2019 at summits created an impression of crisis, envoys said.

Leaders are also set to commit to reducing NATO militaries' climate impact, and to lowering the bar for any retaliation to cyber attacks. Space, Afghanistan and political reforms to make NATO more responsive in a multipolar world are on the agenda.

"We believe that NATO is vital to our ability to maintain American security and I want them to know that NATO is a sacred obligation," Biden said on Sunday before flying to Brussels.

NATO to toughen G7 message on China despite Beijing’s cries of ‘slander’ have 964 words, post on newsinfo.inquirer.net at June 14, 2021. This is cached page on Asean News. If you want remove this page, please contact us.