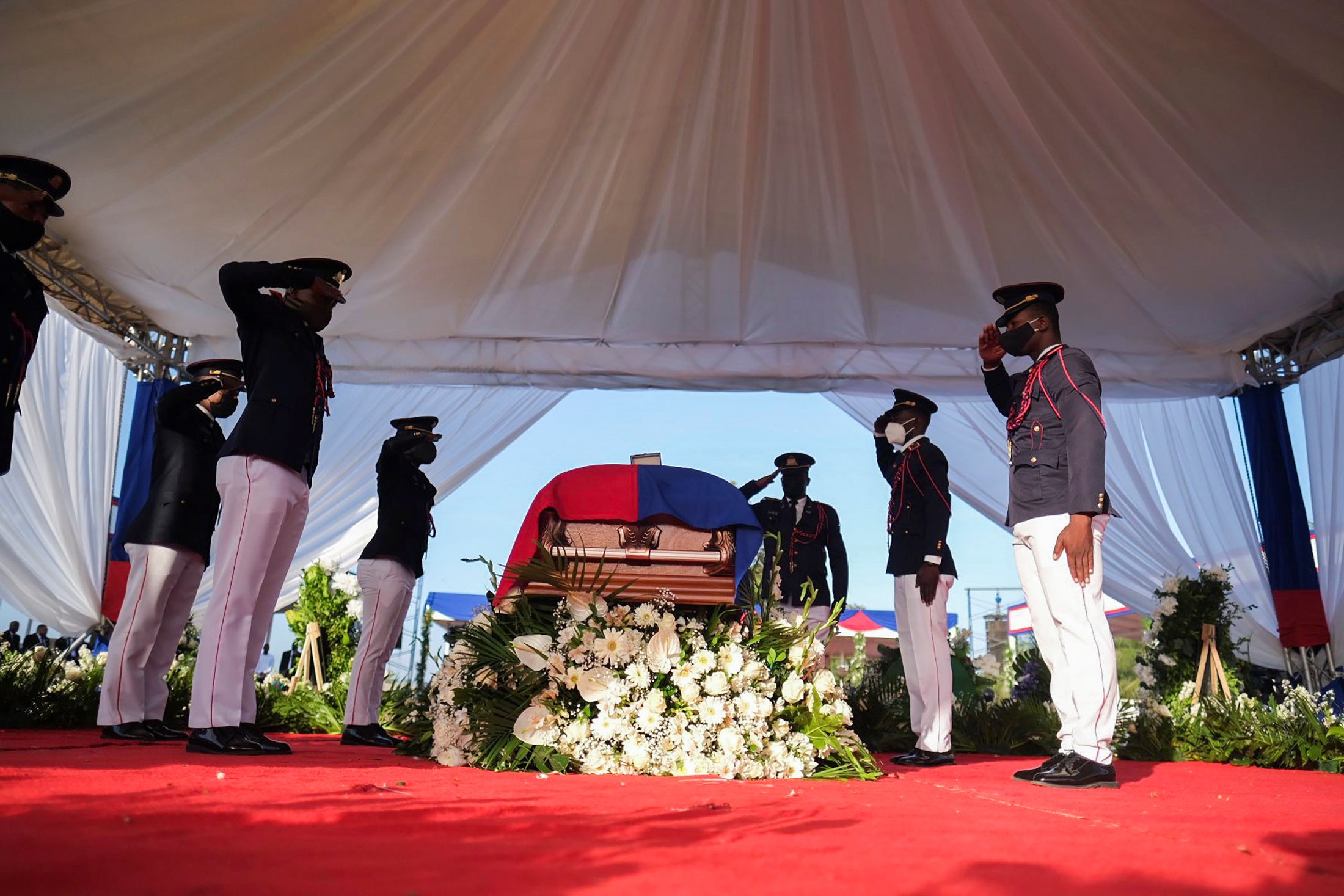 Pallbearers in military attire salute next to a coffin holding the body of late Haitian President Jovenel Moise after he was shot dead at his home in Port-au-Prince earlier this month, in Cap-Haitien, July 23, 2021. REUTERS/Ricardo Arduengo

CAP-HAITIEN, Haiti — The funeral of assassinated Haitian president Jovenel Moise on Friday was disrupted by shots fired nearby and riot gas used on protesters, prompting a high-level U.S. delegation to abruptly leave and other dignitaries to duck into vehicles for safety.

The state funeral in the northern city of Cap-Haitien was intended to foster national unity, but the disturbances reflected deep division over the June 7 atrocity, in which foreign gunmen walked apparently unchallenged into the presidential residence and shot Moise multiple times, also injuring his wife.

Few answers have emerged about who planned the killing, or why.

There were no immediate reports of injuries among protesters or authorities on Friday, and no indications any guests at the funeral were in danger. Reuters witnesses smelled the gas and heard detonations they believed to be shots outside the site of the service.

Smoke billowed into the compound. Dozens of police and security officials formed protective cordons around Haitian officials in the stands.

U.S. President Joe Biden's ambassador to the United Nations, Linda Thomas-Greenfield, was in attendance, leading the U.S. delegation. The delegation had heard the gunshots and was returning home slightly earlier than expected, according to a source familiar with the situation.

"The presidential delegation is safe and accounted for in light of the reported shootings outside of the funeral," White House press secretary Jen Psaki told reporters.

"We are deeply concerned about unrest in Haiti."

Earlier, in remarks made as the delegation arrived in Cap-Haitien, Thomas-Greenfield called on Haiti's new Prime Minister Ariel Henry to create conditions for legislative and presidential elections "as soon as feasible."

"The Haitian people deserve democracy, stability, security, and prosperity, and we stand with them in this time of crisis," said Thomas-Greenfield on Twitter. "We urge everyone to express themselves peacefully and refrain from violence."

The service went ahead, with speeches by family members, but it was punctuated by angry shouts by supporters accusing authorities of responsibility for Moise's death. Their words were sometimes drowned out by loud swells of taped somber church music.

The coffin was put in a concrete tomb about ten feet (three meters) deep, and covered by iron bars, then sealed with planks of wood, cement and large rocks. The tomb stood near a mausoleum to Moise's father, who died last year just a couple of years shy of 100.

"Why do you have all this security, where were the police on the day of the president's assassination?" one protester said.

The protests by supporters of Moise have convulsed Cap-Haitien, the slain leader's hometown, for three days.

The demonstrators have been venting anger over the many questions that remain unanswered about the assassination, including who planned it and why.

"You lost one battle, but the war is not over. We must find justice for you," the president's widow Martine Moise said in Haitian Creole, her face nearly hidden under a wide-brimmed black hat and her right arm in a sling after being injured in the attack.

She said the system was stacked against him, citing powerful business interests seen in the country as a defacto oligarchy, without giving details.

"Cry for justice. We don't want revenge, we want justice," she said.

For some, the assassination was a reminder of the ongoing influence foreign actors have in the poorest country in the Western Hemisphere, despite it becoming Latin America and the Caribbean's first state to become independent from Europe at the start of the 19th century.

The attack was carried out by a group that included 26 Colombian former soldiers, at least six of whom had previously received U.S. military training. Haitian Americans were also among the accused.

The mercenaries were disguised as U.S. Drug Enforcement Administration agents, a ruse that helped them enter Moise's home with no resistance from his security detail, authorities have said. One of the arrested men, a Haitian American, had previously worked as an informant for the DEA.

The turmoil has pushed Haiti up U.S. President Joe Biden's foreign policy priorities and on Thursday the State Department named a special envoy for the country. But Biden has rebuffed a request by Haiti's interim leaders to send troops to protect infrastructure.

Moise himself faced major protests. He was accused in a Senate audit of involvement in embezzling more than $2 billion of Venezuelan aid, and angered opponents by ruling by decree and seeking to expand presidential power.

Gang violence surged under his watch and the economy suffered.

However, support appeared strong in his hometown. Banners celebrating Moise festooned buildings along the narrow streets of Cap-Haitien's old town, with proclamations in Creole including, "They killed the body, but the dream will never die," and "Jovenel Moise – defender of the poor."

Protests break out at Haiti president’s funeral, guests run for cover have 1098 words, post on newsinfo.inquirer.net at July 24, 2021. This is cached page on Asean News. If you want remove this page, please contact us.