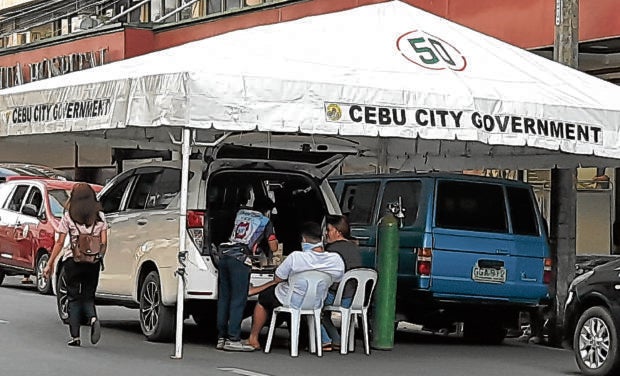 WAITING IN LINE A patient with COVID-19 symptoms has to be attended to by his family at the back of their vehicle on Monday, with their own oxygen tank in tow, as they waited for hours to get into the emergency room of Chong Hua Hospital, one of the biggest medical facilities in the city.. —NESTLE SEMILLA

CEBU CITY, Cebu, Philippines — Andres (not his real name) had a severe headache on Friday.

The 55-year-old businessman was rushed to the privately owned Cebu South Medical Center in Talisay City in southern Cebu but there were at least 30 patients ahead of him—all waiting to be accommodated in its emergency room.

His family decided to bring him to Chong Hua Hospital in Cebu City, one of Central Visayas' biggest medical facilities, at around 7 p.m. but he was No. 12 on the waiting list. They tried other hospitals in the city but the lines were even longer.

"The priority list in other hospitals reached between 20 and 30. That was why we decided to go back to Chong Hua," Andres' elder sister said.

With nowhere else to go and worried about losing his slot in the waiting list, Andres had to remain at the back of the family's pickup truck parked outside the hospital. Since the patient had difficulty breathing, the family quickly searched for and bought their own oxygen tank for his use. A nurse from the hospital would check on him, especially his oxygen saturation count, from time to time.

As of 3 p.m. on Monday, Andres was still inside his pickup and was by then second on the waiting list.

"It's just too sad to think about what is happening. People are fighting for their lives and yet they were asked [to wait in] the line," Andres' sister said.

The situation of Andres echoed that of many other patients with COVID-19 symptoms who were forced to wait for admission in hospitals overwhelmed by the surge in coronavirus cases in Cebu City.

On Sunday, families of at least 33 patients had to line up outside Chong Hua Hospital before they could be attended to by the physicians at the emergency room (ER). Some patients had persistent coughs while the others experienced difficulty in breathing.

Oxygen tanks were seen standing next to some of the private vehicles, as a number of patients had to be provided with their own breathing apparatus while waiting for their turn to get into the ER.

While most patients stayed inside their cars, others had to lie down on folding beds or on mattresses laid out by the roadside.

All of the patients waiting in line at Chong Chua had been swabbed for possible COVID-19 infection as they waited to be examined.

While there are a number of private and government hospitals in Cebu City, there were just too many people heading to these facilities with COVID-19 symptoms.

Last week, DOH Central Visayas Director Jaime Bernadas said health experts believed that the presence of the more transmissible Delta variant caused the surge in COVID-19 cases in Cebu, where 32 persons had been found positive for the Delta variant.

"What is happening is so painful to behold. It's really heartbreaking to see patients wait in their cars or outside the hospital," said City Councilor David Tumulak, who went to Chong Hua Hospital on Sunday.

"Some of these patients have been waiting since Friday. They tried to go to other hospitals but were turned down because there was also no vacancy. They decided to stay here because this hospital (Chong Hua) has a bigger parking space," he added.

Acting Cebu City Mayor Michael Rama on Monday said he was informed by one hospital official that they had beds but not enough personnel to attend to patients with COVID-19.

But a DOH tracker showed that many of Cebu's hospitals were already near full capacity as of Aug. 1.

Cebu City hospitals overwhelmed with COVID-19 patients have 897 words, post on newsinfo.inquirer.net at August 3, 2021. This is cached page on Asean News. If you want remove this page, please contact us.