A pet store chain outlet in Kota Damansara, Selangor, Malaysia has come under fire after it allegedly left a puppy unattended, resulting in an accident which claimed its life.

Facebook user Jayanth Sridhar posted an update on October 9, claiming that it was the “shameful negligence” of staff at Petsmore which allegedly led to the accident.

According to Jayanth, the incident had transpired at the Petsmore outlet after he left his 5-month-old toy poodle puppy named Peanut there, while he and his wife took a short vacation.

The couple returned on October 5, and received an emergency call on the same day from the Petsmore outlet. The pet store informed them that there had been an accident.

When the couple reached the pet store, they were told that Peanut had fallen off a grooming table and passed away.

“This was one of the many stories they told us, all lies,” Jayanth alleged.

The couple decided to check the store’s CCTV footage and discovered the horrifying nature of the accident.

According to Jayanth, a Petsmore staff had removed Peanut from the play area to tend to another customer.

However, instead of putting peanut back in his crate, the staff placed him on a grooming table and leashed him.

The staff then turned around and started grooming another dog on an opposite table.

In the CCTV footage, Peanut could be seen jumping in circles on the table. Jayanth wrote that the dog was “uncomfortable being left alone on a table that high.”

Moments later, while Peanut was trying to manoeuvre itself on the table, it slipped and fell over the edge. However, the leash was too short and Peanut was left choking and struggling in the air.

The staff, who was grooming the other dog at the opposite table, did not appear to notice that Peanut was struggling.

Here’s part of the clip take from the CCTV footage.

Jayanth also claimed that Petsmore did not attempt to reach out to the couple for close to 48 hours, except for a staff member who was with the couple throughout the ordeal.

In an update to the story, Jayanth revealed that Petsmore reached out to Jayanth and his wife with a letter one day after he uploaded his post, which was five days after the incident.

In the letter, Petsmore accepted that a “personnel mistake” resulted in Peanut’s death, namely that the puppy should have been secured with a leash around his body instead of his neck.

The pet store chain also said that the staff in question had handed in her resignation letter because she was unable to forgive herself.

You can read the letter here: 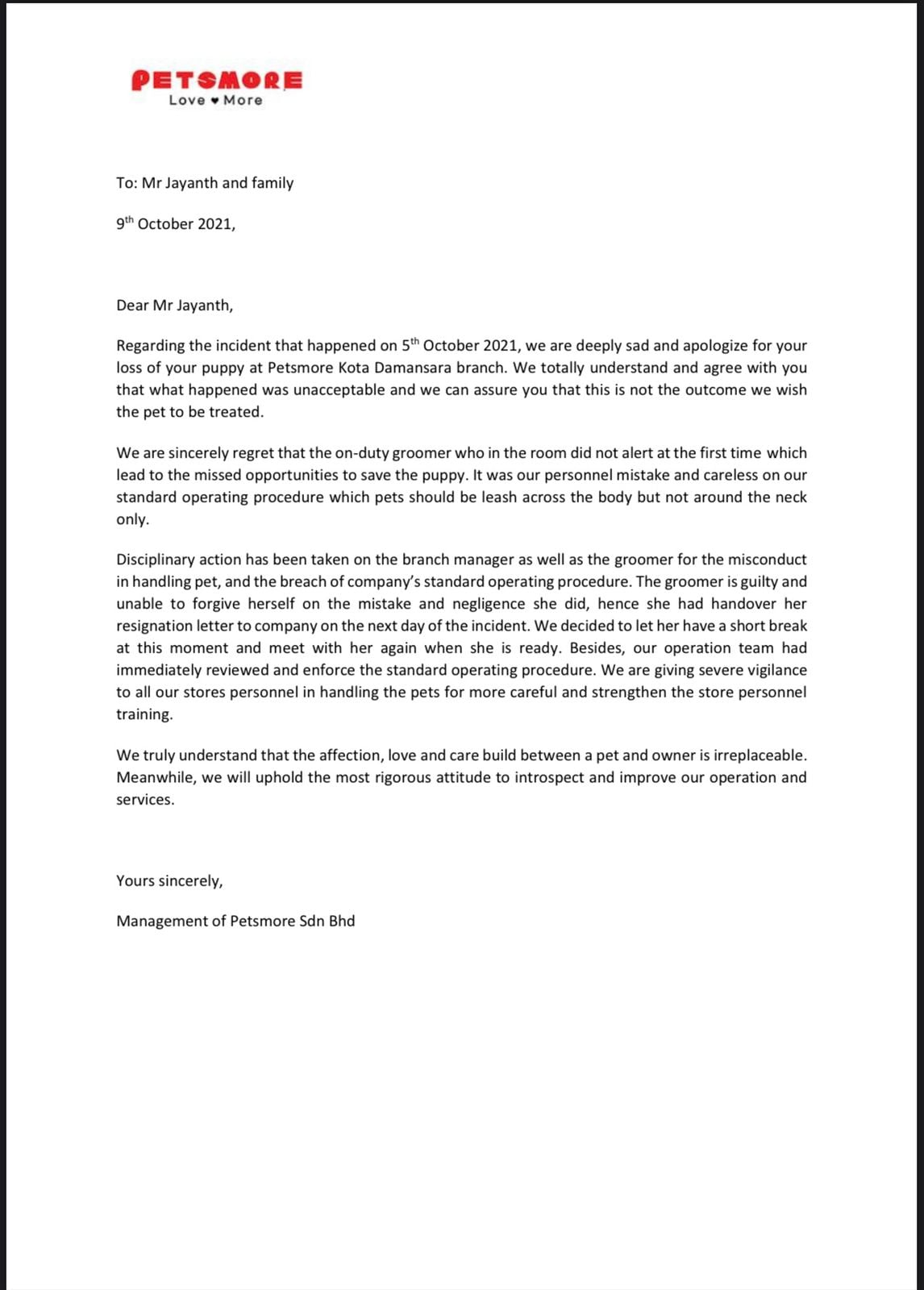 The pet store also offered the below statement to Malaysian news site SAYS :

“It was our personnel’s mistake and carelessness on our standard operating procedure (SOP), which pets should be leashed across the body but not around the neck only (sic). We sincerely regret that the on-duty groomer in the room was not alerted the first time, which led to a missed opportunity to save the puppy.”

With regard to compensation, the pet store said:

“We already settled the issue with the customer with necessary compensations, which he had agreed with.”

Leashed pet dog accidentally hangs itself after falling off table at M'sian pet store have 777 words, post on mothership.sg at October 30, 2021. This is cached page on Asean News. If you want remove this page, please contact us.