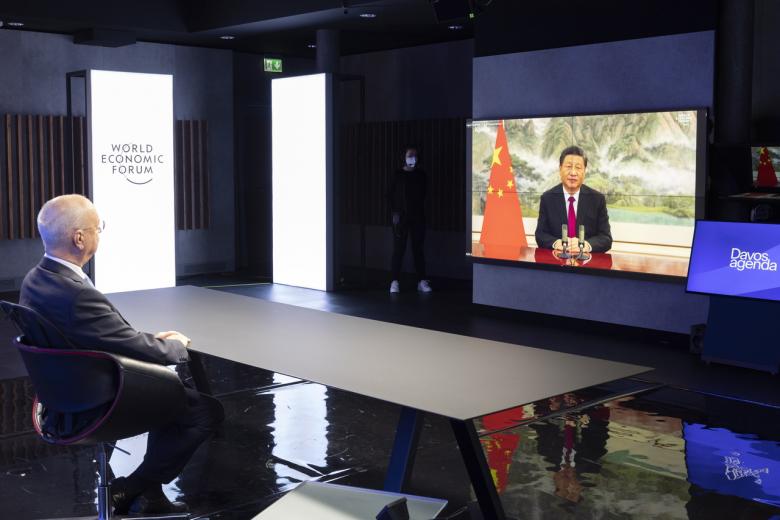 BEIJING – China's President Xi Jinping has warned the United States and its allies against hegemony and bullying, as friction continues to overshadow relations between the two great global powers.

Mr Xi criticized "acts of containment, suppression and confrontation", saying they would invite "catastrophic consequences" and do harm to world peace and security.

The warning was delivered on Monday (Jan 17) at the opening of the World Economic Forum's (WEF) Davos Agenda online conference, which Mr Xi once again used as a platform to speak against protectionism and what he described as a polarization of the world, even as China is also increasingly looking inwards.

Without naming the US, he urged the world superpower to "discard the Cold War mentality" and seek peaceful coexistence.

"Our world today is far from being tranquil. Rhetoric that stokes hatred and prejudice abounds," he said in an half-hour virtual address.

"Yet a zero-sum approach that enlarges one's own gain at the expense of others will not help. Acts of single-mindedly building exclusive yards with high walls or parallel systems, of enthusiastically putting together exclusive small circles or blocs that polarize the world, of overstretching the concept of national security to hold back economic and technological advances of other countries, and of fanning ideological antagonism and politicizing or weaponizing economic, scientific and technological issues, will gravely undercut international efforts to tackle common challenges," he said.

Since the Trump administration, the US has rolled out sanctions and policies aimed at curtailing Chinese enterprises and technological development, some of them in the name of national security and others citing human rights violations in Chinese territories such as Xinjiang and Hong Kong.

US President Joe Biden has also been coraling like-minded liberal democracies to form coalitions against Beijing, such as a security pact with Britain and Australia – Aukus – that will help arm Australia with nuclear-powered submarines to deter China's growing influence in the region.

In turn, China has been cultivating closer ties with its neighbor Russia, and been on a charm offensive targeting nations in Africa and South-east Asia, notably with its vaccine diplomacy and Belt and Road Initiative, whereby it has made major infrastructure investments in developing or poor nations.

On Monday, Mr Xi made sure he included this point in his speech, saying that China is "a country that delivers on its promises".

It has already sent more than two billion doses of its home-grown vaccines to more than 120 countries and international organizations, he said. Another one billion doses will go to African nations, including 600 million free doses, and 150 million doses to Asean countries.

He called on nations to carry out joint research into Covid-19 and work on global economic recovery together, urging developed nations to adopt responsible economic policies that will not have severe impact on poorer nations.

Mr Xi, who is almost certain to seek a third term in office at the year end, also trumpeted the Communist Party of China's achievements, such as wiping out absolute poverty last year and surpassing 8 per cent growth in the economy despite the pandemic.

This is the third time Mr Xi has spoken at the forum. In 2017, he became the first Chinese president to attend the annual summit in the Swiss Alps, leading an 80-strong delegation of businessmen and officials in a show of force that signaled Beijing's ambition to take on a bigger leadership role in the world.

During his two previous appearances, President Xi had similarly defended globalization and warned against an increasingly polarized world driven by fears of China's growing world dominance.

China’s Xi Jinping hits out at ‘acts of suppression, confrontation’ have 754 words, post on newsinfo.inquirer.net at January 18, 2022. This is cached page on Asean News. If you want remove this page, please contact us.