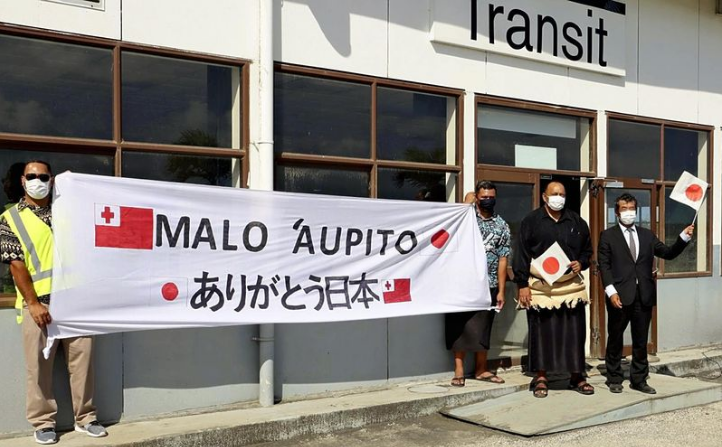 TOKYO — Following the eruption of an underwater volcano in Tonga, the Japanese government is focusing on providing aid to the South Pacific nation, eying Beijing's growing influence in the region.

China is increasing its influence by providing infrastructure assistance to nations in the South Pacific region. Japan intends to counter Beijing's efforts with the aim of realizing a "free and open Indo-Pacific."

The government moved quickly to provide assistance to the disaster-hit nation.

Japan announced an emergency aid package of more than $1 million (about ¥114 million) on Jan. 19, the day after receiving a request from Tonga. A decision was made to dispatch a Self-Defense Force plane on the morning of Jan 20, and it left Japan that evening.

On Saturday, the SDF aircraft delivered its first batch of relief supplies, about 3 tons of drinking water — the third fastest delivery after Australia and New Zealand.

The Tongan prime minister, foreign minister and other government officials were at the airport to welcome the arrival of the plane, with a banner expressing their gratitude to Japan.

Sixty high-pressure washers to remove volcanic ash and 50 wheeled carts are scheduled to arrive around the middle of next month.

The SDF aircraft will be based at an air force facility in Australia. "We will work in close cooperation with Canberra, based on shared universal values," Defense Minister Nobuo Kishi said.

The Japanese and Australian governments are rushing to provide assistance to Tonga because of China's presence in the region.

Tonga established diplomatic relations with China after severing diplomatic ties with Taiwan in 1998.

When commercial facilities and government offices were vandalized in a large-scale riot in Nuku'alofa in 2006, Tonga received a huge amount of financial assistance from China to rebuild its infrastructure and other facilities.

According to the World Bank and other organizations, Tonga's external debt in 2020 was $194.3 million (about ¥22 billion), with China accounting for about 60% of the total.

Following the Tonga eruption, China announced an aid package worth $100,000 (about ¥11.4 million), about 10% of what Japan has pledged. A senior Foreign Ministry official said: "Debt-ridden Tonga cannot turn its nose up at China. It's not easy to eliminate Beijing's influence."

China is advancing its maritime expansion through economic cooperation to create a huge economic zone under its Belt and Road Initiative.

Beijing is involved in the construction of port facilities in the South Pacific archipelago of Vanuatu, which also has a high percentage of foreign debt owed to China. The Japanese government has increased its vigilance because of fears China may use the port and other facilities for military purposes in the future.

Inquirer calls for support for the victims of Taal volcano eruption
Responding to appeals for help, the Inquirer is extending its relief to the families affected by the recent eruption of Taal volcano.
Cash donations may be deposited in the Inquirer Foundation Corp. Banco De Oro (BDO) Current Account No: 007960018860.
Inquiries may be addressed and emailed to Inquirer's Corporate Affairs office through [email protected]

Japanese aid to Tonga aimed at countering China’s influence have 695 words, post on newsinfo.inquirer.net at January 26, 2022. This is cached page on Asean News. If you want remove this page, please contact us.