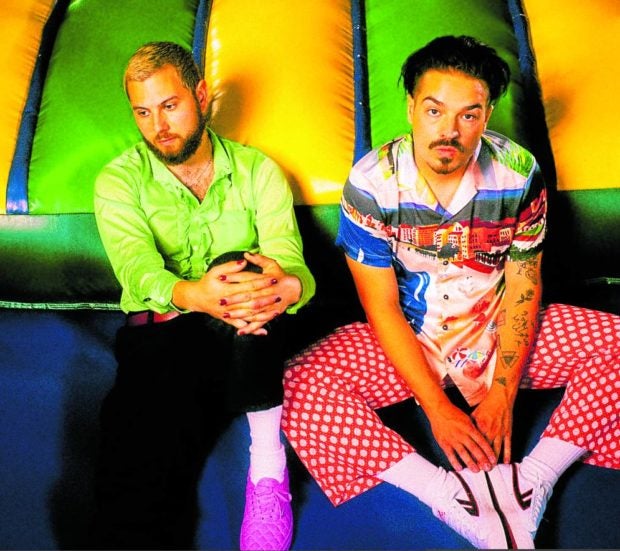 Because of the COVID-19 pandemic, the German pop duo Milky Chance had to cancel an entire slate of live shows. And though Clemens Rehbein and Philipp Dausch enjoy playing music for their fans through digital media, there's nothing quite like feeling the energy of a live audience.

"We really missed playing in front of real people. Last year and this year, we did those livestream events. They were also fun. But you can't compare those to being in a show and sharing music with people," Clemens said of resuming touring last year.

"It's just a whole different vibe and energy with people in the same room—the feeling of togetherness, connection … It's such a beautiful thing," he told the Inquirer in an interview arranged by Blackstar Asia.

But if there was a silver lining to the challenges of the past two years, Clemens, who sings lead vocals and plays the guitar, said the downtime from the lockdown gave him and Philipp the chance to reflect and immerse themselves in a space where they could just let their creativity flow without external pressures.

"We spent a lot of time in the studio when the lockdown happened. But it felt very free because there were no schedules or deadlines," he said, adding that he and Philipp's creative process during that time reminded him of their early days 10 years ago. "At some point, it's nice to have some time to rethink and reflect on certain things … "

True enough, it was in one of those sessions where the idea for Milky Chance's latest song, "Colorado," sprouted. While the duo's previous works had palpable reggae and folk influence, the new single mixes punk with burnished electronic synths and beats.

"The song was recorded in December [2020] in the middle of lockdown. We were in a studio in Berlin with two other artists. We were working on a different song. But we got stuck, so we decided to take a break and have coffee," Clemens recalled.

"I began playing a riff on the guitar and I was like, 'You know, I like that.' And the first word that came to mind was 'Colorado.' There was no meaning at all in the beginning, but we got hooked on it," he said. "After two hours, 90 percent of the song was finished."

"Colorado," which now has amassed over 50 million global streams, is part of Milky Chance's new EP "Tainted Love," a 12-track collection of new songs, demos and covers of such hits as Dua Lipa's "Levitating," and The Weeknd's "Save Your Tears." "It's just a colorful mix of what we have done in the past months in the studio," Clemens said.

Formed in 2012, Milky Chance's discography has accumulated more than 5 billion streams across various digital and streaming platforms, thanks to the reach and strength of the duo's biggest most popular hits, "Stolen Dance,'" Cocoon" and "Flashed Junk Mind," which have 911 million, 195 million and 169 million streams, respectively on Spotify alone.

Aside from its impressive streaming stats Milky Chance, has also appeared in various late night shows like "Jimmy Kimmel Live!" and played in prestigious festivals, including Coachella, Lollapalooza and Bonnaroo.

Excerpts from our interview with Clemens:

We work very intentionally when we're in the studio. It's not that we always have certain concepts in mind. It just comes and we just go for it. It's just our way of expressing our thoughts, our feelings about certain topics.

It's always up to the listeners how they interpret a song. A song can have millions of different meanings to millions of people.

What's your approach when covering other artists' music?

I love when other artists doing covers really come up with their own versions and put all their creativity into it. They're not just copying it; they're bringing another vibe to it. It's their personal take on that song. So that's also what we're trying to do.

What do you guys think of TikTok and how has it impacted the music scene?

I find it crazy how huge it got over the last two years. It's crazy to see its impact on the music industry.

I think artists are less and less dependent on big record labels. But they're now dependent on social media. Outside music, you also support causes related to environment and sustainability.

How important is it for you to lend your voices to such initiatives?

Through the years, we have become more aware of the responsibility that we have as artists, because I think everyone out there who has a certain impact or following or reach should use that to talk about topics like that, and to encourage people to raise awareness.

How has your music and performing style changed over the years?

We learned more about recording in a more professional way by using various hardware or software. But besides that, I think the way we work is quite the same … The most important thing for us is that we have fun with music, because it's our passion.

Milky Chance talks about the silver lining to pandemic, latest song ‘Colorado’ have 1055 words, post on entertainment.inquirer.net at January 21, 2022. This is cached page on Asean News. If you want remove this page, please contact us.