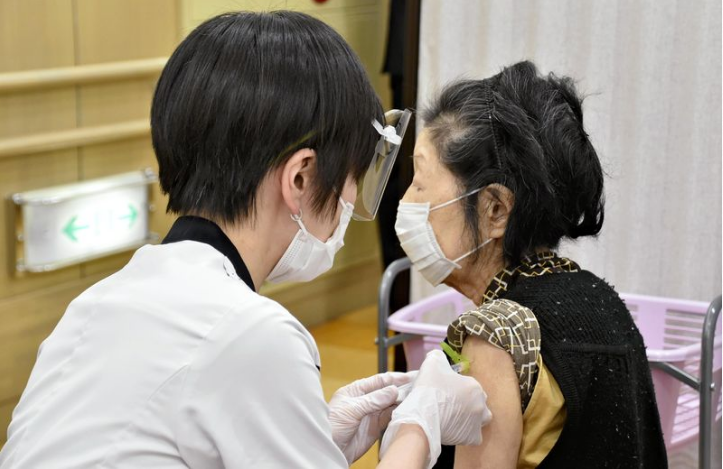 An elderly person who uses a daytime-care facility gets a third dose of COVID-19 vaccine at a venue provided by the Niigata prefectural government. | PHOTO: The Yomiuri Shimbun

TOKYO — Of the approximately 14.7 million people who were expected to receive a third dose of COVID-19 vaccine by the end of this month, only 16% had gotten a booster shot as of Sunday, the Health, Labor and Welfare Ministry has found.

Most of the 14.7 million people eligible for priority in getting a third shot are people engaged in medical services, and elderly people living in nursing care facilities. The administration of booster shots was moved up amid the rapid spread of the highly contagious Omicron variant , but various problems appear to have emerged, including difficulties in confirming the wishes of elderly people.

The third round of COVID-19 vaccinations started in December last year. In response to the rapid spread of Omicron, the central government asked local governments to move the booster shots forward, administering them one or two months before the initial plan of at least eight months after the second dose, in principle.

Booster shots have been moved up preferentially for people including medical workers and elderly residents at nursing homes.

According to the health ministry, about 14.7 million people were entitled to get a booster during the period between last December and the end of this month. They comprised about 5.76 million medical workers, about 6.5 million elderly people, and about 2.44 million working-age people aged 64 or under.

According to the government's Vaccination Record System (VRS), as of Sunday, about 2.36 million people had received a third dose, for a vaccination rate of 16.1%.

By prefecture, Yamaguchi topped the list at 26.9%, while Ehime was at the bottom with 9.8%. Kanagawa was lowest among the prefectures in the Tokyo metropolitan zone, standing at 12.8%.

An official with the municipal government of Zushi, Kanagawa Prefecture, said: "We can't readily ascertain the wishes of many of the elderly people living in nursing care facilities, due to dementia and other illnesses. It's not easy to move forward with the booster shots."

If it is deemed difficult to ascertain a person's wishes, the circumstances must be explained to their relatives and the relatives' consent obtained. It is also necessary to move up coordinating the schedule for a booster with that person's relatives.

Yet, this is a thorny task in reality. "Some facilities have as many as 100 residents who are eligible for a third shot," the municipal official said. "It takes a lot of time to get in touch with their relatives one by one."

In Niigata Prefecture, where the third-round vaccination rate was 12.5%, the prefectural government launched an effort this month to accelerate booster shots by setting up group vaccination sites for people who use daytime-care facilities, and for officials working at such places.

An official at the medical service coordination headquarters of the prefectural government said, "We want to raise the vaccination rate by implementing vaccination services on behalf of municipal governments."

However, some medical service workers are refraining from getting a third dose, fearing that possible side effects could inhibit their ability to provide care.

In Nara Prefecture, where the third-round vaccination rate stands at 10.7%, a hospital official said, "We're worried about side effects. We haven't accelerated [booster shots], so that we can maintain our medical services."

Yasuhiro Kanatani, a professor at Tokai University and a scholar of public hygiene, said: "There's a limit to what can be done in raising the vaccination rate with the efforts of local governments alone. The state has to lighten the burden on local governments by increasing the number of large-scale vaccination sites.

"And regarding side effects, it should disclose relevant data and explain the efficacy to the public."

Only 16% of eligible people in Japan have received an early COVID-19 booster shot have 759 words, post on newsinfo.inquirer.net at January 26, 2022. This is cached page on Asean News. If you want remove this page, please contact us.