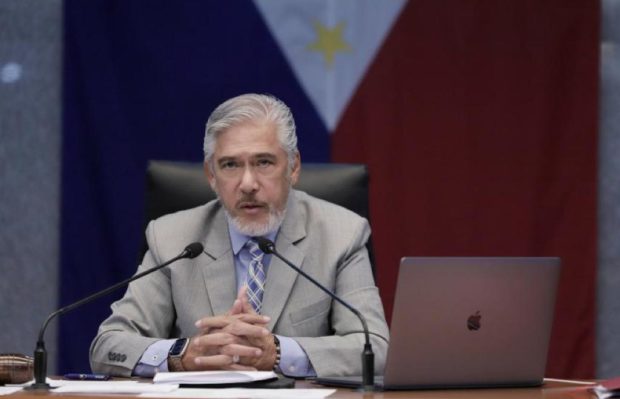 MANILA, Philippines — The proposed creation of the Department of Disaster Resilience (DDR) may not be passed before the 18th Congress adjourns, Senate President Vicente Sotto III.

Sotto said that the bill proposing the department's creation still needs to undergo "heavy interpellation" in the Senate.

"Mabigat pa. Mabigat ang interpellation, baka hindi na umabot 'yun, baka next Congress na nila pi-pick up 'yun (The interpellation remains intense, it might not make it on time. Maybe it will be picked up in the next Congress)," Sotto told reporters.

The House of Representatives approved the proposed DDR in September 2020, which was among President Rodrigo Duterte's priority measures.

Under the bill, DDR will be the primary agency "responsible, accountable, and liable for leading, managing, and organizing national efforts to prevent and reduce disaster risks; prepare for and respond to disasters; and recover, rehabilitate and build forward better after the destruction."

Meanwhile, Sotto said among the measures still being pushed in the Senate are the Marawi compensation bill and the measure providing additional benefits for health workers.

In addition, the Senate has yet to act on three treaties—the Regional Comprehensive Economic Partnership (RCEP) Agreement, the 1961 Convention on the Reduction of Statelessness, and the Arms Trade Treaty.

"We could not approve it on the same day anyway, so we will have two weeks to do that. But I think by Monday we will able to ratify these treaties. And if third reading is necessary, we have enough time to do that," Sotto said.

Sotto likewise said there is still a "very good chance" that the Senate will pass the Financial Consumer Protection Act.

"If sponsored on Monday and if interpellations are not too heavy, baka (probably) by Tuesday or Wednesday ma-approve namin on second reading, then we have another week," Sotto said.

(When the three-day rule kicks in, it can be approved on third reading.)

The Senate has suspended plenary sessions and on-site work this week in light of 88 active COVID-19 cases among its employees and will only allow minimal staff in its building in Pasay City.

Proposed Dep’t of Disaster Resilience unlikely to be passed by 18th Congress — Sotto have 485 words, post on newsinfo.inquirer.net at January 18, 2022. This is cached page on Asean News. If you want remove this page, please contact us.