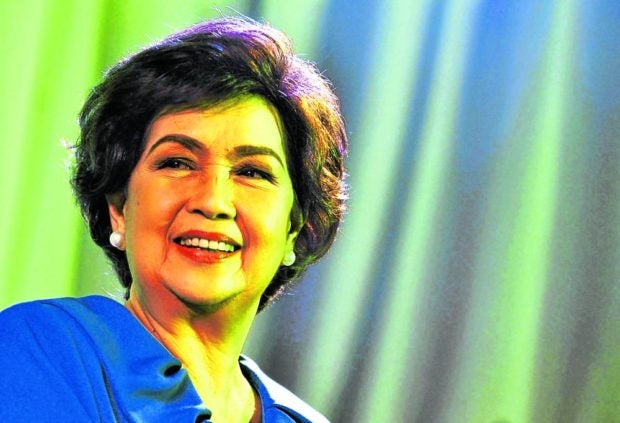 Susan Roces, the "Queen of Philippine Movies" with a radiant career spanning seven decades, including a brief but indelible, real-life role on the political stage when her equally iconic husband ran for president, died on Friday night. She was 80 years old.

Appearing in more than 130 films, Roces started acting at age 11 and bloomed into one of the most beautiful stars and best dramatic performers in Philippine cinema. Contemporary audiences continued to witness her range as she played "Lola Flora," the grandmother of lead character Cardo Dalisay in the long-running action-adventure series "FPJ's Ang Probinsyano." (FPJ stands for Fernando Poe Jr., her late husband and screen legend who died in 2004, and whose 1997 hit movie inspired the TV series.)

Born Jesusa Purificacion Levy Sonora in Bacolod City, the actress will be missed by family, friends and fans for what she delivered on- and off-screen.

She was a winner of five Filipino Academy of Movie Arts and Sciences (Famas) awards, including two for best actress. The Film Academy of the Philippines (FAP) honored Roces with a Lifetime Achievement Award in 2003 for her enduring career and deep contribution to the film industry.

In February this year, the Philippine Postal Corp. issued a special-edition stamp in her honor.

Big giver behind the scenes

Fellow veteran actress and close friend Boots Anson-Roa Rodrigo said that apart from her body of work, Roces would be remembered for her "sense of righteousness without being self-righteous, she always practiced that. She was a very decent person. She did not talk about 'tama o mali' (what's right or wrong); she just did it."

"Susan never blew her own horn about the things she did for other people. She helped a lot of charitable institutions; the latest was the Rivers of Living Water (Catholic community). They are raising funds for their elevator. Pempe (Rodrigo, another close friend of Roces and officer of Rivers) was surprised because Susan donated a rather hefty amount," Rodrigo told Inquirer Enterainment on Saturday.

She further recalled: "Each year, Susan celebrated her birthday with a charitable institution. She would also help the Carmelite Sisters regularly, and yet she never talked about these things. She maintained a very low profile."

"She and FPJ had been a big help to Mowelfund (Movie Workers Welfare Foundation). Even when FPJ died, Susan's help had been very substantial," said Rodrigo, the current Mowelfund chair.

More actors whose lives were touched by Roces paid their tribute on social media. In a message addressed to Roces' daughter, Sen. Grace Poe, Maricel Laxa-Pangilinan said: "It had been a real privilege to have known Tita Swanee and to have shared a wonderful friendship with your family. I have always looked up to your mom and will forever cherish our times together."

Calling Roces "one of my favorite humans," Alessandra de Rossi said "Thank you for the laughter we've shared, for the fact that you never judged me for my 'kakulitan' (peskiness). It was an honor to have been able to make you laugh. You did so much for me and for those around you. Be reunited with your darling."

John Prats, the late actress' costar in "Probinsyano," said he would miss how Roces would take care of everybody by bringing food on the set. "I will also miss the stories you shared with me. We love you so much, 'Lola Flora.' Thank you for all the things you taught us. We were so lucky to have worked and spent time with you." In a statement on Saturday, Senator Poe said her mother "passed away peacefully … surrounded by love and warmth (from her daughter), nephews Joseph and Jeffrey, and many of her family and close friends."

"With great sadness, we announce the loss of our beloved Jesusa Sonora Poe, whom many of you know as Susan Roces," she said.

"She lived life fully and gracefully. Remember her in her beauty, warmth and kindness. She is now with the Lord and her beloved Ronnie—FPJ. We will miss her sorely but we celebrate a life well lived. Susan Roces—daughter, mother, grandmother, a true Filipina, and a national treasure."

A "traditional burial" is set next to the tomb of FPJ at Manila North Cemetery, Poe said. (Details of the wake and interment were yet to be announced at press time.)

On May 19, Roces was brought to Cardinal Santos Medical Center in San Juan City due to a vomiting fit and loss of appetite, Rodrigo said. "Susan's immunity level was really low and she felt weak. The doctors did a procedure on her after all the tests … [and] found a tumor in her stomach. They excised this for biopsy, but the release of the result had been too late," she said.

Susan Roces, 80: Iconic in film, low key in charity have 1053 words, post on entertainment.inquirer.net at May 22, 2022. This is cached page on Asean News. If you want remove this page, please contact us.