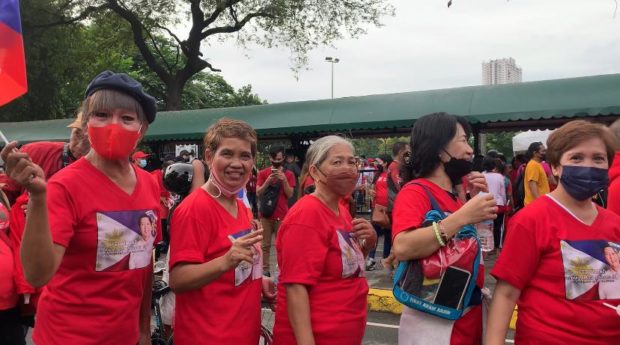 From left: Madonna Merveille and Precy Vizcarra, along with their companions, wait in line outside the Club Intramuros Golf Course to witness Ferdinand "Bongbong" Marcos Jr.'s inauguration.

MANILA, Philippines — From lowering market prices to continuing the Duterte legacy, supporters of the newly sworn-in chief of state Ferdinand "Bongbong" Marcos Jr. believe he will fulfill his promises during his term.

To culminate the celebration following the victory of their presidential bet, Marcos' supporters flocked to the Club Intramuros Golf Course in Manila to witness his inauguration on Thursday.

But they didn't come empty-handed as they brought their high expectations for the president.

INQUIRER.net spoke with a few of Marcos' supporters to peek into their wishlist for the administration.

A promise to lower prices

Madonna Merveille, 65, and Precy Vizcarra, 68, trust Marcos is capable of trimming down the cost of goods just as he vowed.

(He is the smartest president. He will reduce the prices of all goods — electricity, water, and rice.)

Marcos has so far committed to cutting down the price of rice and seeking a study that would recommend a solution to the high power rates in the country.

READ: Bongbong Marcos vows to bring down price of rice

Noting that she has been a Marcos loyalist since birth, Virginia Carreon, 64, expressed confidence that the president will outperform his predecessors.

(We're expecting a lot of good things from him, especially those that were not accomplished by previous presidents. We're certain that the country will prosper and all of his promises will be fulfilled because that's the Marcos trademark. And that's why we're happy that he won.)

(I hope he follows through with what he earlier said. He should continue what President Duterte has started.)

Chairman of the DDS-Metro Manila BBM-Sara volunteer support group Suhaili Abangon, 59, echoed Flaminian's call to uphold what Duterte has established during his term.

(I believe in him. Bongbong Marcos will pursue what we witnessed during the term of our beloved President Duterte.) 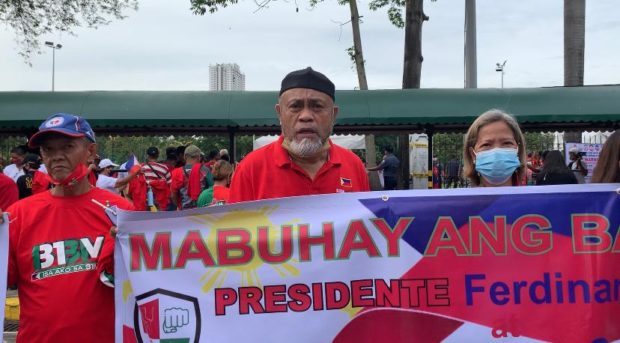 The Duterte administration left a controversial legacy characterized by its brutal campaign against illegal drugs .

The former president is facing a complaint before the International Criminal Court for crimes against humanity in connection with the killings under his bloody drug war.

Marcos' earlier bared his plan to continue the campaign in his own terms. He even attempted to get Duterte as his drug czar , which the latter turned down. 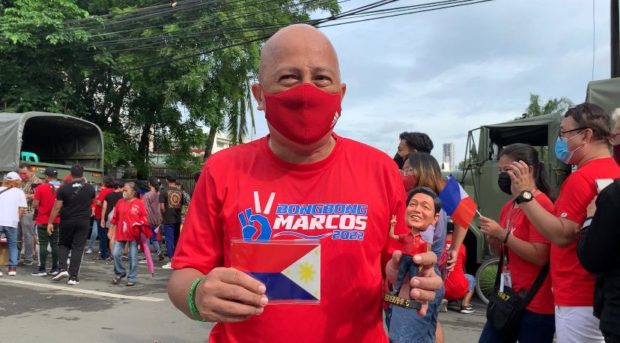 Clad in his Bongbong Marcos shirt, Mike dela Cruz shows off his other Marcos-related memorabilia.

(I expect Bongbong Marcos to continue what his father, President Marcos Sr., and President Duterte started. The platforms he earlier shared when he was campaigning should be fulfilled.)

Marcos Sr., the president's late father and namesake, was a known strongman when he imposed martial law over the country decades ago.

READ: Marcos: Rise and fall of a dictator

(The faults of his father are not his. It's not the son's sins.)

Marcos victory tied with high hopes from supporters have 838 words, post on newsinfo.inquirer.net at June 30, 2022. This is cached page on Asean News. If you want remove this page, please contact us.