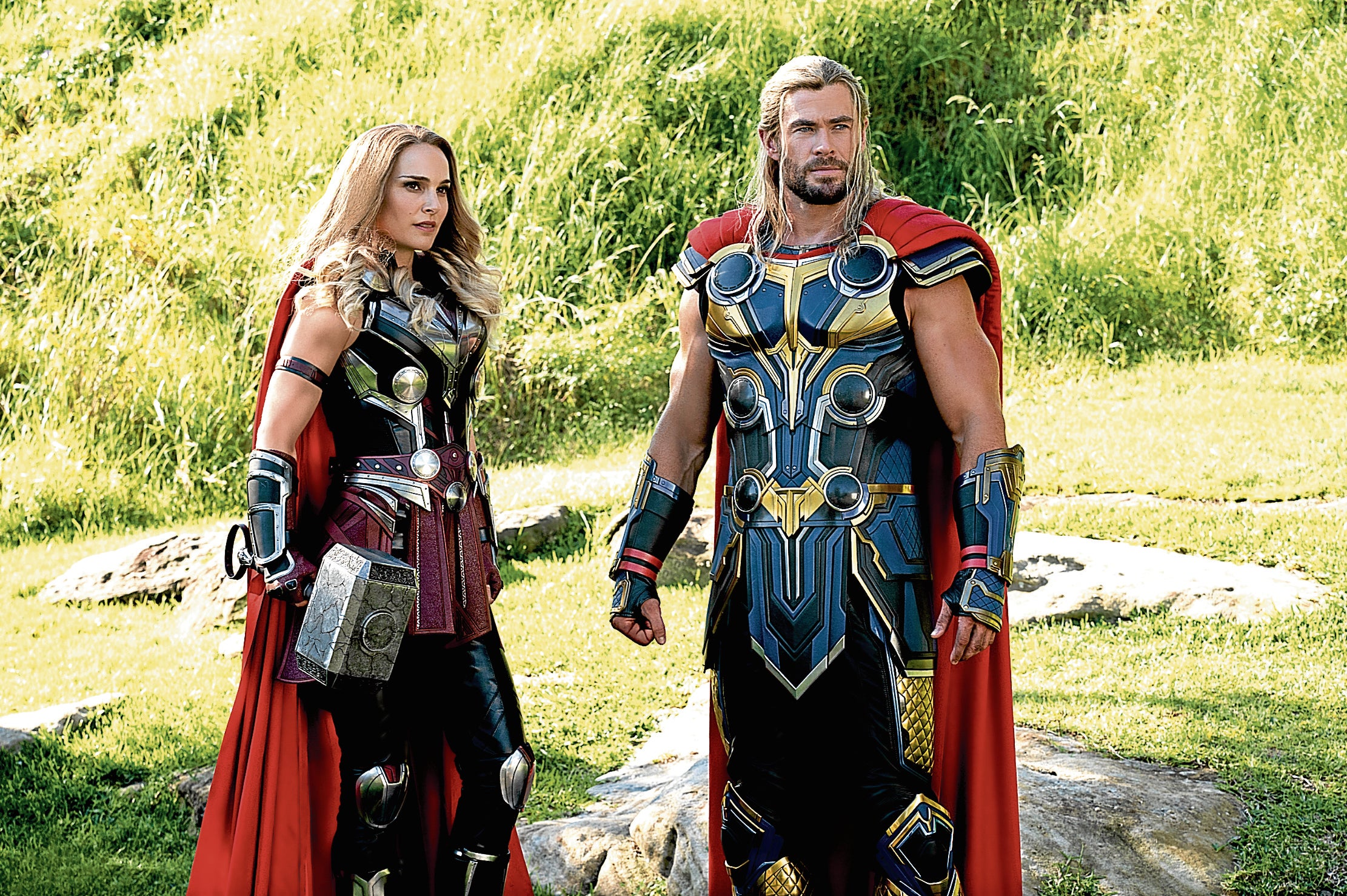 It's just the way life—in the Multiverse or elsewhere—operates. Things don't always go as planned, even when you think you've got your messy life all figured out.

In the case of Thor Odinson (Chris Hemsworth, in this fourth solo outing as the Marvel Cinematic Universe's God of Thunder after 2011's "Thor," 2013's "Thor: The Dark World" and 2017's "Thor: Ragnarok"), however, the challenges are cranked up a few notches higher in actor-writer-director Taika Waititi's hotly anticipated "Thor: Love and Thunder."

In Marvel Studios' "Thor: Love and Thunder," which opens in Philippine cinemas on Wednesday, the Norse god embarks on a journey of self-discovery. But even as he nurses a broken heart and goes "from dad bod to god-bod," Thor's efforts are interrupted by an intergalactic killer known as Gorr the God Butcher (the ultracreepy Christian Bale), who seeks the extinction of the gods. 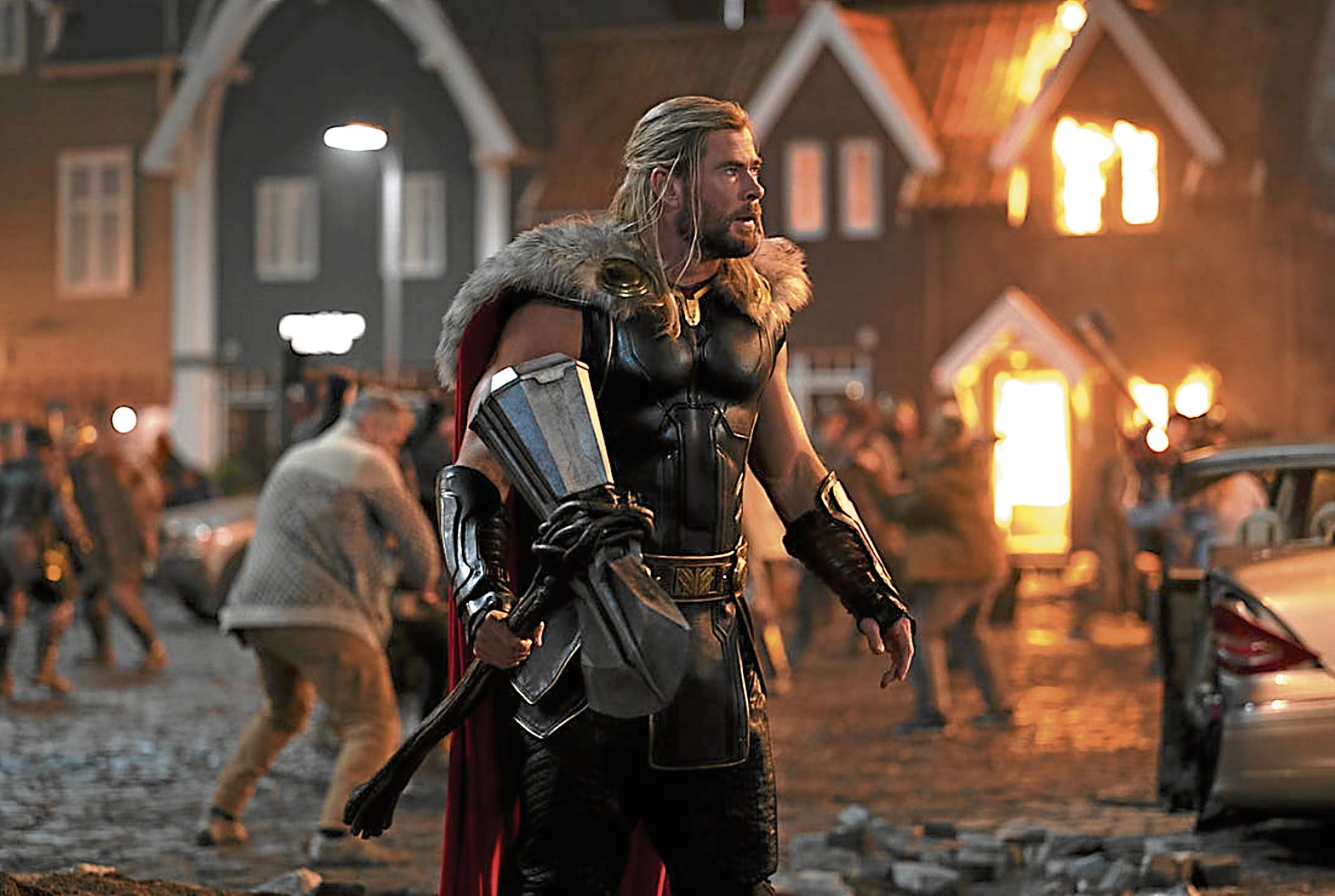 Scene from "Thor: Love and Thunder"

Together they embark on a harrowing cosmic adventure to uncover the mystery of the God Butcher's vengeance and stop him before it's too late.

But while the risks for Thor in his latest adventure are at an all-time high, the Norse god's refreshing relatability has also become the biggest draw for Chris to sink his teeth into his continually evolving character.

Thanks in large part to Taika, who began infusing Thor's humanizing quirks and comedic idiosyncrasies when he helmed his first MCU film via "Ragnarok."

"I related to Thor even more since Taika got involved," Chris said at the press con that Inquirer Entertainment attended last Saturday when asked about how he has grown with the character since the first film in 2011. "Taika brought out the immature, young, adolescent quality that I embody.

"The same is true for Thor now, which was something he didn't have in the original films. It has made this experience exciting and fresh. To be able to enjoy that like a child would, get caught up in the wonder and fascination of it all, and not get bogged down in the serious nature of making movies. 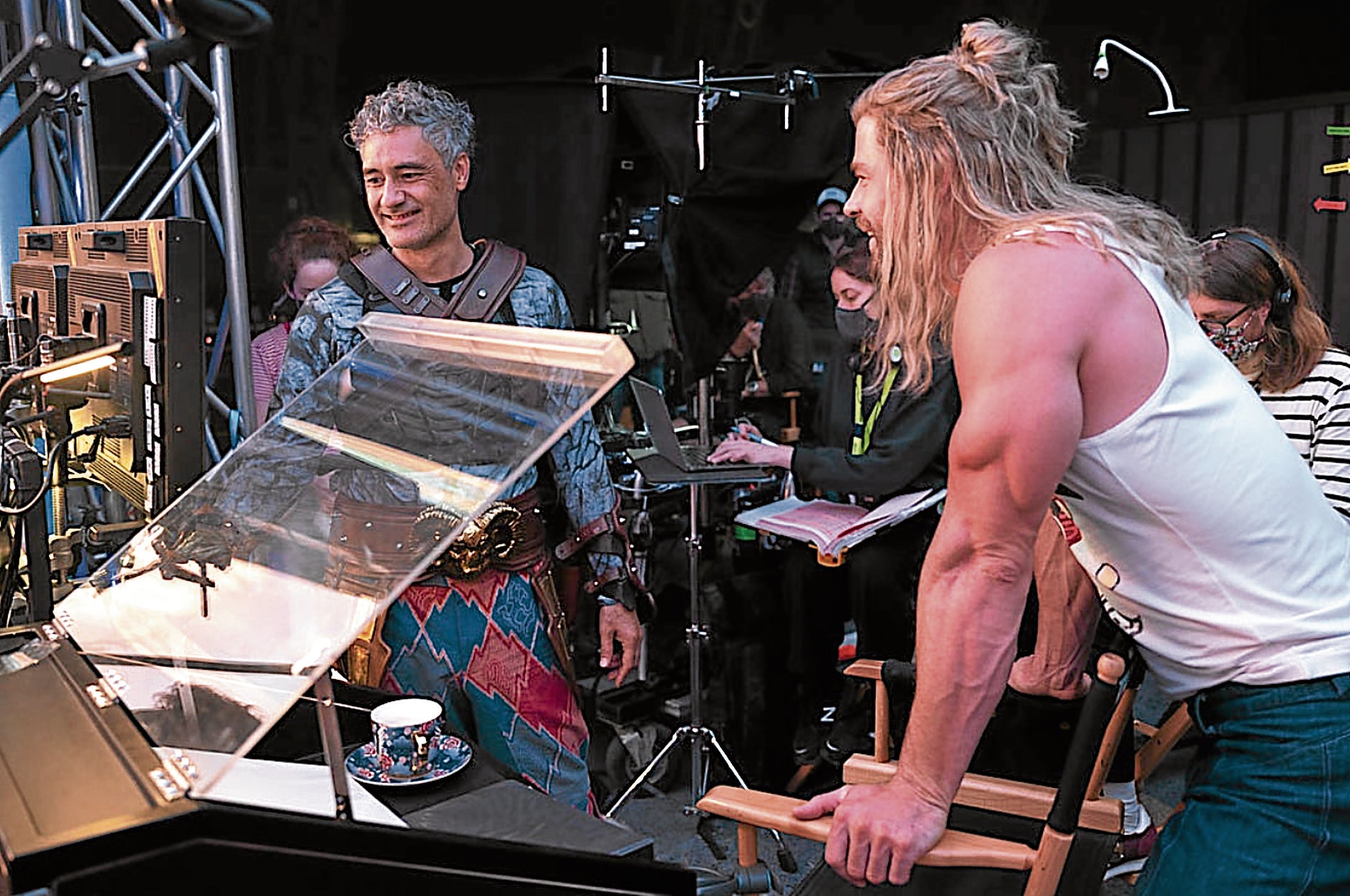 Director Taika Waititi (left) and Hemsworth on the set of "Thor: Love and Thunder" —PHOTOS COURTESY OF MARVEL STUDIOS

"Personally, with this kind of films, it's got to be fun—and that's what we've done with 'Love and Thunder.' That's what Taika insisted upon."

Indeed, it's the more whimsical style and humor-enhanced tone that are making the franchise more accessible to viewers, as Marvel Studios president Kevin Feige admitted, "Taika certainly brought another dimension that was always there within Chris. There were moments, even going back to the interviews between the two of them on our New Mexico set, where I would notice Chris' humor. I was like, 'Is he trying to be funny? No, he is, like, hilarious!' "The other day, I saw a clip of 'Avengers: Age of Ultron,' where Chris as Thor is seen trying to make Mark Ruffalo's Hulk feel better about smashing a bunch of people—and it's so funny! It really demonstrated his expert comedic timing. And Taika was like, 'What are you guys doing with Chris just letting him hold a hammer up with lightning? Let's tap into everything else he can do!'"

Explaining the 160-degree "reinvention" of Thor, Taika said, "I don't think it's far-fetched to expect change in a character like Thor. He's been around for a long time, so there's time for him to go through different phases.

"So I was relieved when I learned about how high Chris was testing in the 'Ragnarok' screenings. There was also a sense of pride that we'd managed to reinvent this character in a way that made people want to see more of him." 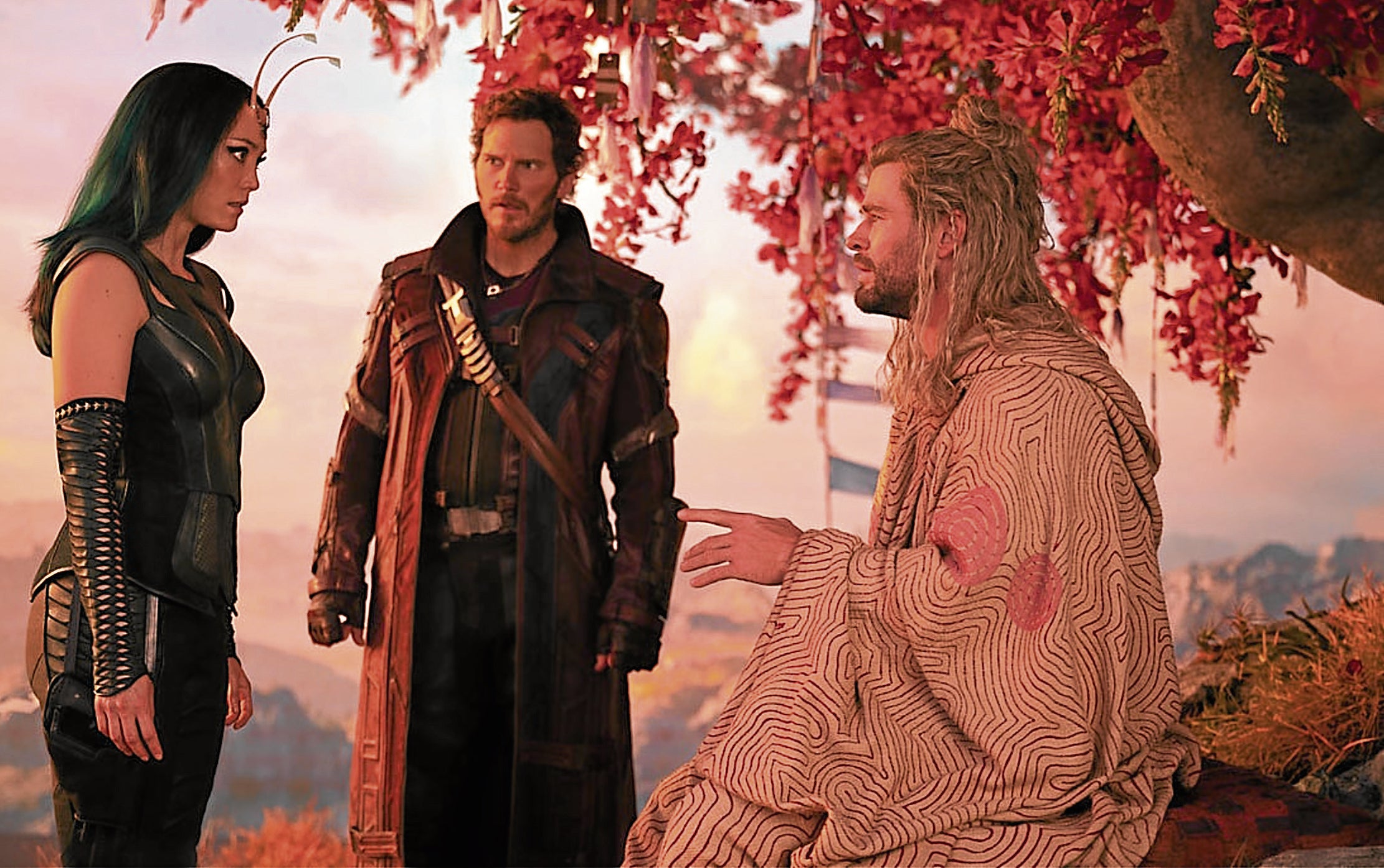 From left: Pom Klementieff, Chris Pratt and Hemsworth in "Thor: Love and Thunder"

But after appearing in seven MCU movies, Chris said that there was a "huge amount of pressure" coming into "Love and Thunder." The 38-year-old actor explained, "Thor is the only character to make a fourth film so far, so I wanted to do something different."

The film is doubly significant for Natalie, who remembers what it was like to finally put her character Jane Foster's "damsel in distress" phase on the back-burner and magically transmogrify into the Mighty Thor.

"Yeah, it was pretty wild," quipped Natalie, laughing. "After watching Chris wear the costume for so many years, then seeing the version on myself and getting fitted for the arm cuffs and the boots and everything—it was pretty surreal!"

Beside Natalie, Chris interjected, "We all went to the gym to put on some muscle—and Natalie was there first every morning. And we tried to keep up with her."

"That's very sweet," she answered. "But I was especially grateful to everyone's imagination in casting a 5-foot-3 actress for a 6-foot role. That takes a real leap of possibility in your mind and it's probably not something I will get the opportunity to do with any other group."

But Natalie's presence provides more than just extra-muscle for this story.

"What sets this movie apart is that, at its heart, it's a love story," pointed out producer Brian Chapek in the film's production notes. "After the events in 'Avengers: Endgame,' we started to see cracks in Thor's armor." After declaring that his superhero days are over, Thor sets out to discover the man he's truly meant to be.

"But most people who are trying to find themselves are really just running away from something," mused producer Brad Winderbaum. "What Thor is running from is love because, in his experience, everyone he loves dies. Whether or not he can articulate it, Thor believes that he's cursed."

"Losing" Jane has without a doubt lingered in the Norse god's mind, even telling the former in their first run-in as male and female Thors that he hasn't seen his former lady love for "eight years, seven months and six days."

With Gorr waging war on the callous gods he had crossed paths with, Thor and the Mighty Thor truly have their work cut out for them. Once a peaceful and pious man, Gorr had experienced a crushing event that propels him on a rage-and-grief-driven mission fueled by his desperate need for revenge.

Christian, who disclosed that "Love and Thunder" is "the only film that my entire family has said I have to do," said that portraying a villain isn't as much of a hard work as playing a superhero (he portrayed Batman in Christopher Nolan's acclaimed "The Dark Knight" trilogy for DC). Asked how he got into his disquieting transformation as Gorr, Christian shared, "We were talking about what everyone was looking for in Chris. With Gorr, they were looking for an actor who was his polar opposite. They wanted someone not relatable, a bit of a loner, creepy, someone no one wants to be around. So, they went, 'Yeah, we found it in Bale' (laughs).

"Look, there's great pleasure in playing a villain. It's a lot easier to portray a villain than it is to play a hero, so Chris had a much tougher job. Everyone is immediately fascinated with bad guys. But the beauty of it is that Taika can make it both bloody hilarious and deeply moving as well. "And I don't know if I'm pushing it too much to say that we wanted some sympathy for Gorr. But certainly, you understand why this guy is making awful decisions. He is a monster, but you'll generate a little understanding as to why he came to be that way."

The aforementioned characters aren't the only ones taking huge strides in "Love and Thunder," though. In the latest movie, Valkyrie (Tessa) comes to terms with having power and a huge responsibility as the king of New Asgard—a long way from falling out of a ship (in "Ragnarok") drunk as a scavenger to becoming the leader of a powerful race.

"The thing that I've enjoyed about these films—which was something that Stan Lee talked a lot about—is the same element that connects heroes and villains to their power: Their trauma.

"So, when we first met Valkyrie, she had a tremendous amount of it, and she was dealing with that by drinking a lot. Taika and I talked about upending what a female superhero looks like. That you have this moment where she comes out, and you think it's going to be this badass thing. But then, she immediately falls over.

"That spirit and physicality were both fun to inhabit. Like, Chris is so tremendous at it, and it's certainly not an easy thing to do. But that allows Valkyrie to be fun and sort of goofy.

"With this one, we talked about the idea of someone who has a job that she truly loves. She was a professional soldier for thousands of years, but she now finds herself stuck in bureaucracy. She really misses being on the battlefield and is missing her sisters. So, it's been great for her to experience that again, especially now with Natalie, in particular, as the Mighty Thor."

‘Thor: Love and Thunder’: Hemsworth, Portman and Bale on reinventing heroes and villains have 1887 words, post on entertainment.inquirer.net at July 1, 2022. This is cached page on Asean News. If you want remove this page, please contact us.